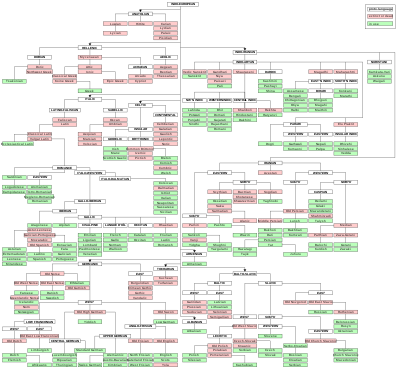 Illustration of the family tree of the Indo-European language

Family tree of the Indo-European languages ​​by Schleicher

Based on his evolutionary theoretical considerations, August Schleicher u. a. the pedigree model of the Indo-European language family .

Aftermath of the family tree theory

The Junggrammatiker that marked linguistics since the 1870s sustainable, rejected the tree model from as well as its corollary, the wave theory of Johannes Schmidt .

Johannes Schmidt argued that the individual Indo-European languages ​​cannot be easily divided into a family tree. He assumed mutual linguistic influences that occurred when language groups came into contact with one another. There are striking similarities between Greek and Italian and between Italian and Celtic . There are similar relationships between Italian and Celtic (on the one hand) and Germanic (on the other hand). Germanic, in turn, has special similarities with Slavic and Baltic . All of these relationships cannot be put into a family tree.

The linguistic geography is not working for decades more with the tree model because this theory does not take into account the constant mixing and self-influencing languages.

Despite the criticism of the family tree theory, some linguists still clung to this theory around the turn of the century (1900).

One must, however, distinguish between family tree representations (in the sense of Schleicher's theory) and hierarchical tree-like structures that have nothing to do with Schleicher's theory. For example, the major German dialects are often divided into Low German and High German , the latter in turn into Middle German and Upper German, without the creators of this “tree” having Schleicher's family tree in mind. These tree structures are not about descent and language division, but about the presence or absence of certain dialect features, such as the presence of traces of the second sound shift .