Rock drilling apparatus in the Schwedenspeicher Museum in Stade

The stone drilling apparatus (also stone drilling machine ) is a device for making hollow holes in Neolithic stone axes , the invention of which was long ascribed to the bearers of Stone Age cultures. Although there is no archaeological evidence for this apparatus , there are a large number of replicas in museums that are exhibited or used for archaeological and museum educational purposes. 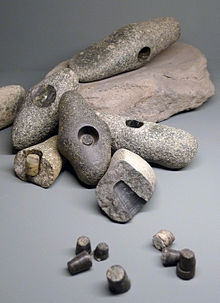 Stone ax blades with neatly drilled holes (eyes) to accommodate the wooden shaft have been known since the beginning of archaeological research . Ax blanks with incomplete bores, with remains of the drilled core, indicated that the holes were drilled hollow. Some stone axes with oval shaft holes caused difficulties in explanation. Only a few unfinished specimens with drilled holes were available of this type. The ancient scholars initially suspected that these holes could only be drilled with metal drills and with the help of complicated drilling equipment.

When the three-period system was created in the 1820s, ancient scholars could not clearly assign the hollow-drilled stone axes to an epoch, since the common doctrine assumed that holes could only be drilled into the stone with metal drills. In experiments in the 1860s, Ferdinand Keller succeeded in conclusively demonstrating that these holes could also be drilled into the stone with drills made from tubular bones or elder wood together with abrasives such as sand. Inspired by ancient Egyptian illustrations, he constructed a drilling apparatus with which he carried out experiments without mentioning the historical existence of such a drilling apparatus in his publication. Based on Keller's experiments, in connection with ethnographic comparisons and his own experiments, Gundakar Graf von Wurmbrand published the construction drawing of such a drilling apparatus in 1875. Four years later, Keller published drawings of his drilling apparatus. After Keller's death, his colleague Robert Forrer continued the experiments and built numerous functional models that he gave to museums. From 1933 onwards, these drilling machines, together with stone saws , were built almost in series in the model workshops of the Reich Association for German Prehistory under Hans Reinerth and sold to institutes, museums and educational institutions in Europe at prices of 30 to 40 Reichsmarks . After the Second World War , further drilling rigs were built in the workshops of the Pfahlbaumuseum Unteruhldingen until 1957 .

Due to their simple technology, the drilling rigs were very popular with museums and visitors. They found further dissemination in the public eye through illustrations in archaeological publications, on school blackboards or on collectibles such as those of the Erdal company .

Modern variant of a drilling apparatus

All masonry drilling machines follow a uniform design: a base plate with a holding device for the workpiece, a spindle drill that rests on the workpiece and is guided in a template at the lower end. A lever loaded with a weight presses on the upper end of the spindle drill and forms its upper bearing. This construction is supported and guided by two pillars mounted on the base plate. The operator rotates the drill by means of a bow and a string looped around the drill.

A lack of evidence from archaeological finds raised doubts about the existence of Stone Age drilling equipment in the 1960s. KE Bleich carried out numerous attempts to drill stone axes with and without a drill and came to the conclusion that these drillings are possible without the use of complex equipment. Apparently, the drilling results achieved by the early experimenters with the drilling apparatus compared with the prehistoric stone axes led to the reverse conclusion that the stone axes were drilled with such an apparatus and that stone drilling apparatuses existed. The national historical image of the 1930s and 1940s of a culturally and technologically advanced Germanic culture and the large number of drilling machines sold by the Reichsbund workshops promoted belief in the Stone Age presence of these machines. Ultimately, these drilling rigs are based on a modern understanding of technology rather than historical circumstances. The traditional image of history that was valid up to the middle of the 20th century, the more than 100-year-old presence of these drilling devices in schools and museums as well as the often uncritical handling of these devices stubbornly shaped the subliminal impression that these drilling devices actually existed in prehistoric times .