On the right is the control grid of an EL84

The Wehnelt cylinder of the cathode ray tube is also often referred to as grid 1 because of its similar function. 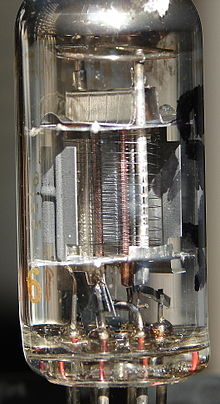 Macro shot of an EF91 pentode

In the early days of tube technology, the control grid in its perforated sheet metal design was actually more reminiscent of a grid. This name has therefore been used to this day.

In its modern design, the control grid is a wire helix which is arranged a short distance from the cathode. A special form of the control grid is the tension grid , in which the particularly thin grid wire is tightly wrapped around two stable supports and fixed on them. The control grid can be seen in the picture: It is wound onto the copper-colored support rods. These must also dissipate heat so that the control grid is not overheated by the neighboring cathode and emits electrons due to the Edison-Richardson effect (see grid current ).

The space loading grid is rarely used. It is still in front of the control grid of electron tubes and is connected to a positive voltage source of 5..20 volts. It accelerates the electrons exiting the cathode towards the anode. This creates a space charge zone in front of the actual control grid that follows, which can be viewed as a virtual cathode. The space charge grid tubes are suitable for low anode voltages, for example the space charge grid tetrode RE074d allows a maximum anode voltage of 20 V.

Before the discovery of the oxide cathode, space charge tubes were often used because their cathode was not very efficient. In order to achieve distortions through saturation effects, the space shutter construction was developed.

The space charge grid is an essential part of electrometer tubes .

Among the more modern tube types, the grid-1-to-cathode circuit variant was used with the EQ 80 , a demodulator tube for frequency-modulated signals . However, the aim here is not to build up the space charge zone, but to limit the maximum anode current in order to achieve perfect interference suppression. This is achieved by winding the first grid very tightly.

So-called regulating tubes have a control grid with a different pitch of the grid helix , either by subsequently separating out individual winding sections or by changing the winding spacing during the winding process. As a result, the grid voltage-anode current characteristic curve of the tube is strongly curved and corresponds approximately to an exponential function . This enables the operating point of the tube to be shifted to areas of different steepness, controlled by the grid bias. As a result, the gain can be controlled within wide limits.

Control tubes are only suitable for amplifying small voltages. Due to the strongly curved characteristic curve, distortions increase disproportionately to conventional tubes with increasing modulation. Therefore control tubes are usually small signal amplifier tubes (as opposed to power output tubes). Based on the type designation , these are often identified by an uneven final number.

The designation control tube comes from the use of this type of tube in the IF amplifier of heterodyne receivers , which must allow variable amplification due to the required loss compensation . The tube is part of a control circuit that is intended to ensure that the volume of the received transmitter remains as constant as possible when the received field strength fluctuates.

There are also tubes that have several control grids ( hexodes , heptodes , octodes and enneodes ) and thus allow multiple control of the electron flow . Control and screen grids are arranged one after the other. The screen grids create a space charge zone in front of the subsequent control grid and thereby form a virtual cathode.