The Widgets of swing with the Ocean look and feel (standard since Java 1.5) 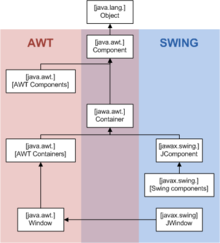 Class hierarchy of AWT and Swing

Swing is a GUI toolkit for the Java programming language from Sun Microsystems . Since Java version 1.2 (1998) it has been part of the Java runtime. Swing is one of the Java Foundation Classes (JFC), which provide a collection of libraries for programming graphical user interfaces. These libraries include Java 2D , the Java Accessibility API (JAAPI), the Drag-and-Drop API, and the Abstract Window Toolkit (AWT). Swing builds on the older AWT and is interwoven with the other APIs.

Swing's main competitor is the SWT developed for Eclipse . The designated successor to Swing is the JavaFX framework , which has been included in the scope of delivery of the Oracle JDK since March 2014, but which has not yet been specified as an official Java standard by the Java Community Process .

Swing has a modular and object-oriented structure, so that it is particularly suitable for developing complex applications. Due to the platform independence, a lot of development and test work is also eliminated.

The appearance ( look , see skin ) and the behavior ( feel ) of swing components can be adjusted using so-called look-and-feel . Both the Motif look and feel and the metal look and feel (from Java 5 the ocean look and feel) are available on all platforms , and on Linux Gtk, Mac and Windows an additional system standard customized own look and feel. There are a number of independently developed appearances, most of which are metal based. Since Java 1.5 the synth look and feel has been added, the appearance of which is composed of images and is described in an XML file so that no Java code has to be written. With Java 1.6, Update 10, the completely vector-based Nimbus look and feel was introduced.

Swing components are rendered directly by Java and do not depend on native operating system components . This means that all Swing components work in the same way on all platforms, regardless of whether the respective platform provides a component or not. The disadvantage is that a Swing application doesn't look like an application designed for the operating system. However, this can be compensated for by a selection of appropriate pluggable look-and-feel. This property is described with the English word Lightweight UI (lightweight = all-Java language).

Compared to AWT , Swing has the following additional components that can be used to create surfaces:

Swing is not thread-safe , so unexpected interactions between different threads can occur if not programmed carefully. Instead, the Swing components are implemented in such a way that their methods always have to be executed in a so-called Event Dispatch Thread of the AWT , which carries out the entire event processing of graphically interactive Java applications. To simplify this, the helper class provides SwingUtilitiestwo methods that can be called from other threads and take an executable object of the type Runnableas a parameter.

Violations of these conventions are not reported to the programmer, so that associated difficulties remain undetected for a long time or are not resolved at all. UI frameworks such as SWT or .NET WinForms handle this differently and acknowledge faulty calls immediately.

Outside of the JRE, Sun provided a base class called SwingWorker , which offers two methods to be overloaded: One that is called in a separate thread and can perform a long-lasting operation and another that is executed in the event dispatch thread after this operation has ended and manipulate swing components. There is also a mechanism that allows intermediate steps (e.g. in a progress indicator) to be visualized. Since Java 1.6 it has been included in the JRE as javax.swing.SwingWorker.

Swing was first delivered as an external library with JDK 1.1.5 at the end of 1997 and has been an integral part of the Java runtime environment since JDK 1.2 ("Java 2") at the end of 1998. Swing soon had a reputation for poor performance and unsuitable for "serious" applications. The standard style ( look and feel ) of swing windows did not find that many friends either.

The Hello World program is given here as an example of a Swing application :

Parts of this source code are executed by different threads . The thread that executes the main method is usually not the event dispatch thread (EDT). Swing components should generally only be created and changed by EDT (unless the documentation expressly states otherwise). The source code for the GUI is therefore packaged in its own runnable object. The thread that executes the main method only creates the runnable object and instructs Swing to execute this source code later in EDT.

Swing can be expanded at various points using the plug-in concept built into Swing. Typical extensions relate to Look & Feels, layout managers and other components.

The SUN open source project SwingLabs offers a number of extensions for Swing and serves as a test environment for future extensions of Swing. Among other things, the classes GroupLayout, SystemTray and Desktop introduced in Java 6 were hosted in SwingLabs. Further extensions are collected by the java.net Java Desktop Community in the Java Desktop Swing Depot. JGoodies by Karsten Lentzsch also offers a range of swing extensions, such as the FormLayout.

The Spring Richclient project offers an integration of Swing into the Spring Framework. However, it has not been further developed since mid-2009.

There are a number of mostly paid WYSIWYG GUI design tools for Swing. The following are the most popular: