With the atonement order (888/41) General Field Marshal Wilhelm Keitel issued an order for the Wehrmacht High Command on September 16, 1941 to execute 50-100 civilians for every German soldier killed in an ambush. The Atonement Order resulted in hostage-taking among civilians (especially Communists , Jews and Gypsies ) and was an element of the Holocaust and Porajmos . Keitel was u. a. Sentenced to death and executed for this criminal order in the Nuremberg trial of the major war criminals .

Since 1940 there have been hostage shootings as reprisals on the German side at various theaters of war . In autumn 1941, the OKW's disregard for martial law was summarized in the atonement order on Hitler's instructions:

“A) In every incident of rebellion against the German occupying power, regardless of the circumstances in detail, it must be concluded that it has communist origins.

b) In order to nip the activities in the bud, the sharpest means are to be used immediately at the first occasion to enforce the authority of the occupying power and to prevent further encroachment. It should be remembered that human life in the affected countries is often nothing and a deterrent effect can only be achieved through unusual hardship. As atonement for a German soldier's life, the death penalty for 50-100 communists must generally be considered appropriate in these cases. The type of enforcement must increase the deterrent effect. "

On October 1, Keitel ordered the military commanders to keep hostages ready at all times so that they could be executed if soldiers attacked.

Due to the attack on the Soviet Union in the second half of 1941, only relatively weak units of the Axis powers stood in the rugged area of ​​the Balkans, and at the same time partisan activity increased because the communist underground's strategy of holding back was no longer applicable. As in Russia, the Wehrmacht reacted by shooting hostages, mostly of Jewish origin. Against this background, Hitler called on the Wehrmacht Commander-in-Chief Southeast Field Marshal Wilhelm List in the Führer Instruction No. 31a of September 16, 1941 , to put down the insurrection movement in the southeast region with the sharpest means.

The military commander for Belgium and Northern France, Alexander von Falkenhausen, authorized the killing of at least five hostages per soldier in accordance with the atonement order on September 19, 1941 if the perpetrator could not be identified. On September 16, 1942, Falkenhausen complained to Keitel that the measure, rather than a deterrent effect, was more likely to damage the people's trust in law and security and to stir up hatred of the occupying power. The hostage system was not ended.

The French military commander Otto von Stülpnagel initially opposed mass executions in France, but at the end of 1941 had to give way after several actions by the French underground and had 95 hostages executed. On February 5, 1942, he called in sick and was relieved of his post. At the Nuremberg trial, 29,660 shot hostages were listed for France. 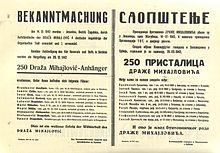 Announcement of the execution of 250 hostages, commanding general in Serbia, December 26, 1942

When on October 2, 1941, an ambush in the city of Topola cost the lives of 22 armed forces, the German commander in charge of Serbia, General Franz Böhme , decided to shoot 2100 mostly Jewish inmates of the concentration camp in Sabac . Subsequently, Böhme continued on this path and had all communists and all Jews arrested as hostages. The criminal occupation practice of shooting hostages and the racist logic of extermination were intertwined, so that Serbia was reported free of Jews at the end of 1942 . An estimated 41,000 to 45,000 people were killed in retaliation during World War II.

In the military administration in the east there was little reference to the atonement order. There, in the fight against the intensifying activities of the resistance groups in September and October 1941, the troops were driven to ever greater brutality by the command posts, but the events were still determined by the individual commanders and troop leaders who set their own quotas.

At the Nuremberg trial of the main war criminals, Keitel was sentenced to death on October 1, 1946, among other things because of the order of atonement and his order of October 1, 1941 to always keep hostages ready.

In the hostage trial , it was found that Wilhelm List's order of atonement was passed on to his subordinate units and that his successor Walter Kuntze adhered to the quota. Various officers charged tried to defend themselves on the grounds that they were acting on orders . The court made it clear that an order to retaliate at an arbitrary rate is criminal under all circumstances and that they knew or should have known and would be held accountable.

Walter Warlimont , who was involved in the formulation of the order on the Wehrmacht command staff, was convicted on October 27, 1948 in the High Command of the Wehrmacht trial, whereby the court did not believe his defense strategy that he had taken steps against the implementation in the entire area of ​​the Wehrmacht. since, on the other hand, he had stated that he had been in a subordinate position.