The four tones of standard Chinese

With the property of a tonal language , a change in tone is also associated with a change in the meaning of the word. Standard Chinese has four such tones; the neutral tone is sometimes counted fifth.

The standard Chinese syllables are pronounced with a tonal change, which makes it possible to distinguish them and take on completely different meanings. A pronunciation without correct intonation usually leads to the speaker not being understood. The pronunciations of the two words Běijīng ( 北京  - "Beijing") and bèijǐng ( 背景  - "background") can only be distinguished by their tonal values.

The following example is used to illustrate this:

This sentence contains all the tones of standard Chinese.

Many other Chinese languages have more than four tones, Cantonese z. B. has nine tones. In contrast to Cantonese, there are no relative dependencies in pronunciation, a single syllable indicates the tone, a relative delimitation to the following syllables is not necessary.

The tones are divided as follows:

The pitch of the high tone is constant and high, the tone almost sung instead of spoken. The tone strength is constant. This tone is represented by a bar above the vowel.

The pitch of the rising tone rises from the lower to middle to the high pitch, similar to the intonation of a question in German. It's about 10 percent shorter than the first note. The tone strength increases as the syllable progresses. It is represented by an acute .

With the falling-rising tone , the pitch sinks down from the middle level and usually rises again to the middle level. Exceptions occur here due to clay sandhis (see below). It is about 15 to 20 percent longer than the first tone and therefore the tone with the longest tone duration. The tone strength is loudest at the beginning, then falls and rises a little at the end of the syllable. He is represented by a hatschek .

The pitch falls sharply downwards and the syllable is pronounced shorter with more affect, comparable to the German accentuation of a command (e.g. Geh! ). It has a tone duration that is around 20 to 25 percent shorter than the first tone, making it the shortest full tone. The sound level drops sharply. It is represented by a grave accent .

The neutral (5th) tone is usually not counted:

The falling tone sounds short and light and is therefore often not regarded as a separate tone. It has less than 50 percent of the duration of the first tone and extremely low strength.

The neutral tone often occurs with polysyllabic words where the second syllable is pronounced less strongly than the first. So 媽媽  /  妈妈 is spoken as māma , the neutral tone occurs here in the second syllable, although both stand for the same character. It is usually shown without a tone above the vowel. Since the spelling reform of 2012 in dictionaries, the light tone may be designated by a center point in front of the syllable (· ma). In the past, the light tone was sometimes represented by a point (ȧ) or ring (å) on the vowel (rarely: the syllable nasal).

A common example to illustrate the difference in Chinese is to compare the syllable ma and their different meanings depending on the tone:

The pronunciations of the four tones with the syllable "ma" to listen to ? / i

As the example shows, pronouncing the correct tone is compulsory, since it is only through it that a correct meaning is given; the pronunciation of the syllables is quite variable depending on the speaker - the tone, however, is always the same. A rudimentary comparison is the difference in meaning in German for the four words Leder, Luder, Lader, Lieder , with a shift in the first vowel.

For didactic reasons, among other things, it is necessary to display the sounds. In addition to the explicit designation by the name of the tone, an identification using a tone form or an indexing of the tones is a common means. 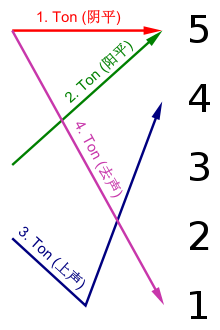 The Chinese linguist Zhao Yuanren developed a system for notating tones. He divided the pitch into five levels, with 5 being the highest and 1 being the lowest. The tone change can be represented as a tone form by linking the numbers. That's why you write for Mandarin

The at Tonsandhis occurring semi-third tone can be represented by / 21 / (see below).

This form is used, among other things, for descriptions in the International Phonetic Alphabet .

Many romanizations such as Pinyin , MPS II, and Tongyong Pinyin use diacritical marks above the vowels to represent the tones. The Zhuyin transcription also uses diacritical marks. In the romanization Wade-Giles , however, a superscript number is usually used at the end of the syllable to indicate the tone.

In the rarely used Romanization Gwoyeu Romatzyh , the tones are not represented by additional characters outside the syllable, but the syllable is expanded with letters. So for the above syllable “ma” is represented with the first tone as mha , with the second tone as ma .

The tone signs are often left out, however, because for native speakers a pronunciation emerges from the context of meaning and people who do not speak the language are usually not able to pay attention to the tones during pronunciation.

The transcriptions generally do not deal with the occurrence of tone sandhis (see below) - the reader is required to determine the correct tone value himself.

Like other Chinese languages has the high-Chinese over Tonsandhis , can occur in the context-dependent sound changes. A subsequent syllable can influence the original tone value of a syllable (root tones).

Tonsandhi of the third tone

Representation of the half-third tone with the following syllable in the 1st, 2nd or 4th tone

The numbers 七  - "Seven" and 八  - "Eight" are similarly spoken by many speakers before a fourth tone in the second tone, before other tones in the fourth tone and isolated in the first tone.

North Chinese once had a fifth tone called the "entry tone" ( 入聲  /  入声 , rù shēng ), which was also used in other Chinese languages. It is still preserved in the Jin language . This entry tone is a tone of very short duration and ends with a consonant or crackling sound. Its sound is described as " like an arrow striking a wooden board ". However, this tone does not exist in modern standard Chinese. In South Chinese, for example, the Cantonese language also has the "entry tone".