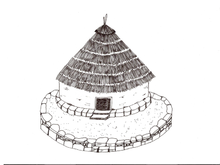 The Tairona were a pre-Columbian people with a highly developed culture in the area of ​​today's provinces of La Guajira and Magdalena in the Republic of Colombia .

The origin of the Tairona and the early phase of their culture are largely in the dark due to the lack of written records. Like the other South American cultures, the Tairona did not develop their own script. Written certificates are only available from the Spaniards. One of the first reports about the Tairona is contained in the travel description De Orbe Novo by the humanist, diplomat and historian Pedro Martyr d'Anghiera (1457–1526).

Until around 800 AD, the people lived in small, scattered villages in the coastal region. A burial mound with gold objects from the 6th or 7th century AD was discovered near the coastal town of Nahuange in Colombia in 1922. More recent dates at archaeological sites go back to the 2nd century BC. BC back.

From the 9th century onwards, for unknown reasons, the Tairona withdrew more and more into the inaccessible areas of the Sierra Nevada de Santa Marta and, starting around 1000 AD, built around 200 terraced cities at altitudes of 900 to 1200 meters.

The Tairona did not form a nation in the modern sense, but a network of scattered cities. The cities were opened up and connected to one another with a well thought-out system of paved paths, bridges, walkways and stairways. Every independent city, around which smaller settlements accumulated, was subordinate to a warlord . The strictly hierarchical society was dominated by an influential priest caste.

For the construction of the settlements, the steep terrain was leveled and terraces made of stones were built. Palm-leaf-roofed round houses made of wood for the extended families rose on these raised platforms. The buildings made of perishable materials have long since ceased to exist, today only the characteristic round house platforms are visible. From the location of archaeological finds, one can conclude that the houses were separated into areas for women and men. In the women's area, more on the edge of the house, there were fireplaces and household appliances: saucepans, jugs and grinding stones. In the men's area, stone axes, ceremonial objects and weights for fishing nets came to light. In addition to the residential houses, the terraces of which had a diameter of approx. 6 to 7 m, there were much larger ceremonial houses with several entrances, stairs, columns and stone tables and benches. Among the excavated ceremonial objects were stone sceptres and axes, fork sticks and so-called “Placas Sonajeras” (English: rattling disks), strange propeller- shaped pendants made of polished stone, whose purpose is unknown.

The center of urban culture was Ciudad Perdida (English: lost city), which at its height in the 16th century had around 2,500 inhabitants and covered around 13 hectares. Further, archaeologically partially researched cities of the Tairona are the near the coast Pueblito in the Departamento de Córdoba and Chengue, in today's Parque Nacional Natural Tairona on the Bahía de Chengue.

According to reports from the Spaniards, various forms of burial were common among the Tairona, both drying and smoking the corpse and placing it in caves with subsequent second burial of the bones in funeral urns . 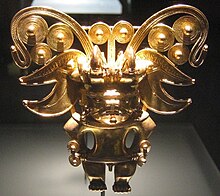 Gold work of the Tairona

The Tairona made sophisticated pottery. Characteristic of the Tairona ceramics are incised and highlighted with white paint patterns on dark colored clay. The grave urns, about one meter high, ornately decorated with faces, are particularly well known.

The gold work was at a very high aesthetic and handicraft level. Gold was considered a symbol of fertility, the power of which is transferred from the sun to the wearer. In contrast to other pre-Columbian cultures, gold jewelry - mostly tumbaga , however - was not reserved for dignitaries, but could be worn by anyone.

Among the preserved works of art are human figures with animal attributes, e.g. B. zoomorphic combinations of dwarf human figures and bats (possibly depicting priests with headdresses and masks) as well as bird motifs are particularly common. A characteristic, regularly occurring graphic pattern on the gold work is the spiral . The masterfully crafted jewelry was made in the lost form using the lost wax technique, but it was also hammered, driven and soldered. Particularly beautiful gold artifacts from the Tairona are exhibited today in the Museo del Oro in Bogotá and in the Metropolitan Museum of Art in New York City .

The warlike Tairona opposed the invasion of the Spaniards in the 16th century and rejected Christianity. By 1630 even the most remote cities were conquered. Immediately afterwards, the systematic, ruthless search for gold objects and the looting of settlements and graves began. The Spaniards melted the found works of art. The few Tairona survivors withdrew to the even more inaccessible mountain regions of the Sierra Nevada de Santa Marta. Today their descendants are the Kogi people .