Tenor guitar (English: tenor guitar ) is the name for a first in the 1920s in the United States introduced type of guitar that instead of the stringed instrument formerly standard guitar six strings has only four strings. Initially, the tuning of the strings intended for tenor guitars was identical to that of tenor banjos , in the pitch interval fifth . This should make it easier for banjo and violin players to switch to the guitar. In the following decades, tenor guitars in Vollresonanz- were (hollowbody), Halbresonanz - (Semi-hollow) and massive construction ( solid body ) made.

History of the tenor guitar 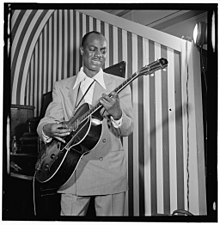 The history of the tenor guitar is closely linked to the development of instrumentation in entertainment orchestras and ensembles in the 1920s. At the beginning of the 20th century, violins were also widely used in entertainment orchestras. With the increase in the proportion of wind instruments in music groups, the demands on the volume of the instruments increased. Therefore, many violinists switched to the louder banjo , which, in its four-string version in fifths tuning, kept problems getting used to a minimum.

In the 1920s, the banjos also lost popularity as instruments belonging to the rhythm section of orchestras in the USA - in favor of acoustic guitars , which gained in volume potential during this time with increased dimensions of the instrument body . Some banjo players adapted to the changing tastes of the time and the associated job opportunities and switched to the guitar.

The musical instrument manufacturers met the new demand and developed the tenor guitar in the second half of the 1920s, which, like the violin and tenor banjo, has four strings and is tuned in fifths. The pitch of the first tenor guitars, which were designed as a pure rhythm and accompanying instrument, corresponds exactly to that of tenor banjos with cg-d'-a '. Instruments of this design have 19 frets .

Later models of tenor guitars were modified to meet the demands on the pitch range of melody instruments. The scale length has been lengthened by about 10 cm and the neck has 22 instead of 19 frets in this variant. The tuning of this “plectrum guitar” has also been changed: The most common tunings are cg-h'-d 'and dg-h'-e' (in fourths , corresponding to the four higher strings of six-string guitars in standard tuning ).

Since the 1960s, tenor guitars have largely disappeared from the range of guitar manufacturers and also from the music public. With the guitarist Tiny Grimes (see photo opposite), the last internationally known musician, who mainly played this instrument on stage and on recordings, died in 1989.

One of the most famous tenor guitar players in German-speaking countries is the German-Austrian actor and singer Peter Kraus . Kraus played electrically amplified semi-resonance tenor guitars in the 1950s and 1960s, promoting musical instruments made by Framus . However, the Framus tenor guitars were deleted from the company's product range back in the 1960s.

Well-known manufacturers of tenor guitars included the musical instrument manufacturers Gibson , Epiphone , CF Martin & Co. , D'Angelico, National and Guild . The Martin company is one of the few manufacturers who currently still have tenor guitar models in their product range. Eastwood Guitars has been making a signature tenor guitar since 2010 , in collaboration with Warren Ellis from Nick Cave and the Bad Seeds . The Czech company Amistar builds a resophonic tenor guitar.