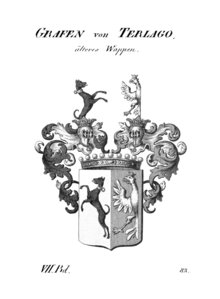 Coat of arms of the Counts of Terlago

The Counts of Terlago were an old noble family , originally from Trento , and later also native to Austria .

The Terlago family is mentioned for the first time in a document from the Prince-Bishop of Trient Altmann von Lurngau from 1124 with the noble prince of Terlago. Since that time the Terlago appear as noble vassals of the bishopric of Trento . However, like all the noble families there before 1500, they were released from episcopal jurisdiction as a result of a settlement concluded by Emperor Charles V with Bishop Bernhard von Cles in 1523. Their headquarters in Terlago is located a few kilometers west of Trento in the Valle dei Laghi, at the foot of the Paganella . The uninterrupted lineage begins with Paul Terlago, who lived in the late 14th and early 15th centuries, and continued into the middle of the 20th century.

With the sons of Franz Terlagos from his marriage to Cäcilie Cozaffi, Johann Anton Joseph and Vincenz, the sex is divided into two lines. Anton Terlago, received a diploma from the later Emperor Sigismund . Parma raised to imperial nobility on April 5, 1432. This emperor also gave the family the coat of arms, which forms the right field in their current coat of arms. According to the diploma of October 17, 1433, the increase in the left field comes from Alexander Prince-Bishop of Trento. Peter II obtained a ddo diploma. Linz July 7, 1636 the imperial count status that has remained hereditary in the family since then. The family received a confirmation of the imperial count status on July 25, 1778. The Terlago was entered in 1508 in the nobility register of the Tyrolean landscape, which was established in 1361. The Terlago are related by marriage to the oldest families in the Tyrolean country, such as the Castelletti, Alberti, Cresseri, Lodron, Salvadori, Spaur and Sontheim.

Known members of the sex

On the right, in silver, an upright black hound with a gold collar. On the left in red, the half of a silver crowned eagle with gold weapons leaning against the outer edge of the shield.