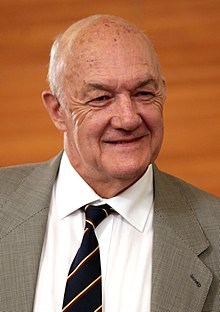 In addition to works on teaching and research on Old English literature , Shippey published in particular on the work of JRR Tolkien as well as on modern fantasy and science fiction . He is widely regarded as one of the leading Tolkien researchers.

Shippey's life and work often intersect with that of Tolkien; like him he went to King Edward's School in Birmingham and taught Old English at Oxford University . He also held Tolkien's former professor at Leeds University .

Under the pseudonym "Tom Allen" he wrote two stories that were published in anthologies by Peter Weston. First, the fantasy story King, Dragon in Andromeda 2 was published in 1977; then in 1978 the science fiction novella Not Absolute in Andromeda 3 .

Under the pseudonym "John Holm" he is also co-author (together with Harry Harrison ) of The Hammer and the Cross trilogy of novels from an alternative world history of the Middle Ages.

In 2000 he received the World Fantasy Award for JRR Tolkien: Author of the Century .

In 2009 he wrote a 21-page academic introduction to Flights of Eagles , a collection of the works of James Blish .