Thomas Scott (* around 1842 probably in Clandeboye , Northern Ireland ; † March 4, 1870 in Upper Fort Garry , Manitoba ) was a Canadian and follower of the Orange Order , who became publicly known during the founding days of Canada in the Red River Rebellion .

Scott spent his youth in Ireland , from around 1863 he lived as a worker in Canada. In 1869 he was a construction worker building Dawson Road , but was fired after leading a strike threatening the death of a supervisor. At the end of 1869 he joined a small group of racist Anglo- Canadians under John Christian Schultz at Upper Fort Garry , the so-called Canadian Party . This sought to annex the fertile land on the Red River by Canada in order to distribute it to new settlers from Ontario and England.

This group tried to fight the Red River Rebellion, but was captured during an attack on December 7, 1869 by the followers of the rebel leader Louis Riel and imprisoned at Upper Fort Garry. During his imprisonment, he repeatedly threatened and insulted his guards and threatened to murder Riel after he was freed. He tried to flee, but was caught by Riel's people and most recently executed on a legally questionable basis for causing public insurrection . 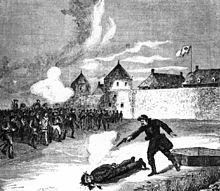 Graphic of Scott's execution in front of Upper Fort Garry from the Canadian Illustrated News of April 23, 1870. Contrary to the representation, Scott was not executed by Riel himself.

The news of Scott's death sparked outrage among the predominantly English-speaking and Protestant population in Ontario (the Métis on the Red River rebelling under Riel were Francophone and Catholic ). After negotiations in May with the Manitoba Act, the province of Manitoba with Upper Fort Garry, renamed Winnipeg in 1873, was created as the capital and most of the Métis' demands were taken into account. Probably because of Scott's execution, Prime Minister John Macdonald refused to grant the Provisional Government an amnesty and sent troops to Upper Fort Garry on a so-called “peace mission”. Since many of the soldiers from Toronto marched out with the express aim of lynching Riel, the Provisional Government did not trust the peace, evacuated the fort and fled into exile.

The hitherto rather unknown and as derogatory and violent attributed Scott became a martyr and his death the main reason for the refusal of an amnesty for Riel. The decision to violently put down the Northwest Rebellion of 1885 and the subsequent execution of Riel were also heavily influenced by Scott's execution. In turn, Riel's execution sparked major protests among Canada's Francophone Catholic population.