Tultepec is a city in the Mexican state of México . The city of Tultepec, the administrative seat of the municipality of Tultepec of the same name , had 64,888 inhabitants on 19.02 km² in 2010.

The city is located 35 km north of the center of Mexico City , belongs to the Zona Metropolitana del Valle de México and is at an altitude of 2,280 m above sea level. d. M.

The name Tultepec is of Aztec origin and means "on the hill of Tule". 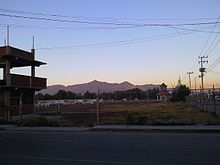 The marketplace of the fireworks market

The city is known for its fireworks industry and the annual festival of fireworks, the Feria Nacional de la Pirotecnia . On December 20, 2016, a series of explosions occurred in the fireworks market in San Pablito, Santiago Teyahualco, just south of Tultepec. Most of the market stalls and pyrotechnic articles would be destroyed. As of December 21, 2016, 32 people were killed and around 70 others injured. Already in 2005 and 2006 there were - less serious - serious explosions and fires.

Tultepec is the home of the Urbán family of musicians, known in Mexico, from which the concert organist Víctor Urbán (* 1934) also comes. The sculptor and painter Miguel Hernández Urbán (* 1936), who initiated the annual symposium for sculptures made of stainless steel in 1992, is also one of Tultepec's sons.