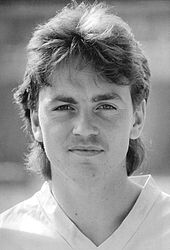 Stations as a player

Ulf Mehlhorn played in his youth at BSG Progress Thalheim and switched to FC Karl-Marx-Stadt (FCK) in 1981 . With the juniors of the FCK he became DDR champion in 1986. He made his debut in the GDR league on March 26, 1988 in the game against Wismut Aue . In the following years Mehlhorn became an important part of the team, which at that time experienced its most successful time after the championship season 1966/67. This is how FCK played in the UEFA Cup at the time . Ulf Mehlhorn was on the field in five games against Boavista Porto , FC Sion and Juventus Turin and scored the decisive goal with a free kick in extra time in the game in Porto , which ensured progress.

Mehlhorn played for Chemnitzer FC in the 2nd Bundesliga until 1995 before moving to the 1st Bundesliga at Fortuna Düsseldorf , where he was also a regular. After Fortuna's relegation in 1997, Mehlhorn played one more season in the 2nd Bundesliga at VfB Leipzig before returning to Chemnitzer FC in 1998, which was now in the regional league . There he played a major role in the rise of the sky blues.

After relegation in 2001, Mehlhorn stayed with CFC and, with his experience, was an important leader in the team. After the 2004/05 season, Ulf Mehlhorn ended his career in professional football and played again for his youth club Tanne Thalheim in the Chemnitz district class. After his promotion to the district league, Ulf Mehlhorn ended his active career in the summer of 2011 after he had “hung on” for another six years.

Ulf Mehlhorn is now an active member of the management team at the Chemnitz Young Talent Center.

Record as a player