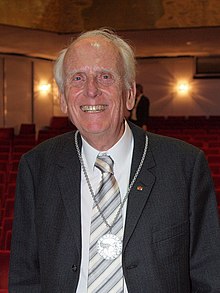 Ulrich Gottstein at the awarding of the Paracelsus Medal, Kiel 2011

Ulrich Gottstein (born November 28, 1926 in Stettin ) is a German internist and co-founder of the German section of the IPPNW (International Doctors for the Prevention of Nuclear War, Doctors in Social Responsibility).

Ulrich Gottstein was born as the son of the lawyer Dr. Kurt Gottstein and his wife Christel were born. His father was the director of the Feldmühle AG pulp and paper factory . Together with his parents and his two siblings, he moved to Berlin-Dahlem in 1938 . This time was to be formative for him: he and his older brother Klaus joined the boys' group of the Evangelical parish of St. Annen - only a few weeks after the parish priest Martin Niemöller was arrested by the National Socialists and taken to the concentration camp. Gottstein was only twelve years old at the time and from then on belonged to the Young Congregation of the Confessing Church .

After serving in the war in France (1944) and being a prisoner of war (1944–1946), Ulrich Gottstein studied human medicine from 1947 to 1952 at the universities of Berlin, Göttingen and Heidelberg (there state examination and doctorate in medicine). After completing further training as an internist and habilitation In 1960, Gottstein worked at the II Medical Clinic of the Ludwig Maximilians University in Munich until 1962 . In 1962 he became senior physician in charge of the first medical clinic at Kiel University Hospital , and in 1966 he became an adjunct professor. From 1971 until his retirement in 1991 he was chief physician at the medical clinic of the community hospital in Frankfurt am Main and professor for internal medicine at the Johann Wolfgang Goethe University in Frankfurt am Main .

In 1972 he was the founding president of the German Society for Angiology and a founding member of the International Society for Brain Circulatory Research.