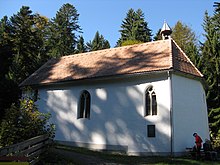 Chapel of St. Ulrich in Möggers

The Ulrichskapelle is a small chapel in the Leiblachtal community Möggers in the Bregenz district in Vorarlberg . The chapel is dedicated to St. Ulrich . It is considered to be one of the oldest sacred buildings in Vorarlberg. It is under monument protection ( list entry ).

The church stands east of the community Möggers in the middle of the forest on a forest clearing. The border between Germany and Austria is only a few meters away to the east.

The legend of the origin says that after the arduous journey over the Pfänderrücken , on the way from St. Gallen towards Bavaria, St. Ulrich sat down exhausted at the place of today's Ulrich chapel and prayed to God for water. Immediately a spring rose from the place of the chapel, which is still used today for eye diseases. In 1005 a chapel was built over the spring in memory of the miracle. Today the altar stands exactly above the source. The small church was renewed in 1890/1891 and restored in 1973/1974 and 2011 to 2013.

The chapel is a simple rectangular building with a 3/8 choir. Above is a gable roof with a ridge turret. The pointed arch windows are pierced by neo-Gothic tracery . At the front of the choir is a circular window with tracery. In the south wall is a Romanesque arched window with a deep reveal.

Above the prayer room is a flat wooden beam ceiling with surrounding ornamental beams. A relief of Christ and the four evangelists is depicted on the ceiling. The Holy Trinity can be seen on the ceiling of the choir . The representations on the ceiling are from 1890. The church walls are painted with Gothic frescoes and red chalk pilgrim inscriptions.

The high altar is a neo-Gothic structure with figures by Fidelis Rudhart from 1890. They represent Saint Ulrich, as well as Saint Ottilia on the left and Saint Barbara on the right . The predella is structured by pointed arch niches. In it are painted flowers with tapes from the Gospels. The tabernacle cross was created around 1890. On the left wall of the choir arch, under a neo-Gothic canopy, the figure of a "Sorrowful Mary" can be seen, on the right side St. Joseph . Both figures come from the barrel painter G. Wetzel . On the walls of the nave, St. Antonius is depicted on the left and St. Wendelin on the right under neo-Gothic canopies from around 1890.