The Union Buildings with the equestrian statue of Louis Botha

The building complex on Meintjieskop was built by the architect Sir Herbert Baker in a monumental style from sandstone . It is 275 meters long. Two wings adjoin a semicircular courtyard, which symbolize the two official languages ​​of South Africa at the time, English and Afrikaans.

Marthinus Wessel Pretorius , who later became the first President of the South African Republic , was the original owner of the Elandsfontein farm . In 1856 Andries Francois du Toit, the first magistrate of Pretoria, acquired part of the farm and named it Arcadia . A hill belongs to this area. Du Toit later sold the land to Stephanus Jacobus Meintjies, after whom the hill was named Meintjieskop . The Union Buildings were erected there. The foundation stone was laid in November 1910 shortly after the establishment of the South African Union , which gave the complex its name. The Union Buildings were completed in 1913. 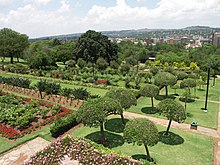 The gardens of the Union Buildings 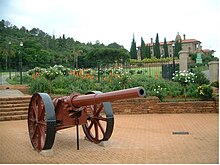 Several memorials and statues are located in the gardens, including the equestrian monument to General Louis Bothas (first Prime Minister of the Union of South Africa), the Delville Wood War Memorial in memory of the South African soldiers who died in World War I and the Korean War , and the South African Police memorial for the South African police officers who died while on duty. The Nelson Mandela statue was inaugurated on December 16, 2013 by President Jacob Zuma and is located on the previous site of the statue of James Barry Munnick Hertzog (Prime Minister 1924–1939). Hertzog's statue was rotated 90 degrees and moved to the east. Some guns line the Union Buildings. A special feature is the 10.5 cm cannon at the western approach, which was originally a cannon from SMS Königsberg and was recovered by the British after it was sunk in the Rufiji Delta .