As pass laws ( English : Pass Laws ) legislation referred to in South Africa served before and during apartheid for monitoring and control instruments as within the black labor force. The Native Urban Areas Act passed in 1923 was an important cornerstone in the network of restrictive regulations . In 1948 the Fagan Commission described the term “passport” in terms of its application within the “racial segregation policy” of the time in such a way that “it was a document” that had the effect of restricting the individual's freedom and as a documentation that could be requested at any time on the granted and strictly limited freedom of movement of every member of an identifiable population group ("particular race") in the labor market should serve the police and other authorities.

The later laws were based on regulations introduced by the Dutch and British in the 18th and 19th centuries in the slave economy of the Cape Colony . In the 19th century, new permit regulations were introduced to ensure a reliable supply of the gold and diamond mines with cheap, docile African workers. These were, for example, in the colony of Natal , the Law No. 48 of 1884 , in the Transkei Territories the Proclamation 110 and 112 of 1879 and 140 of 1885 and in British Bechuanaland the British Bechuanaland Proclamation 2 of 1885 . In fact, these regulations had little legal effect, because entering the Cape Colony was regulated by its own regulations, here by Ordinance 2 of 1837 and Section 3 of Act 22 of 1867 .

The United Party initiated the establishment of the Fagan Commission in 1946, chaired by Judge Henry Allan Fagan , to examine in detail the legal situation of the black population in the industrial metropolitan areas in connection with the existing regulations of the “passport laws” and within the system of migrant labor. The results were published as a government report in March 1948 under the number UG 28/1948. The key message in this report is the statement that the immigration of the black population into the areas administered by the white population is a logical economic phenomenon that requires regulation and management. The numerous proposals included the establishment of a network of employment agencies as well as measures for massive mitigation and the desirable abolition of the previous procedure with “work passes”. Prime Minister Jan Christiaan Smuts announced before the parliamentary elections in 1948 that the commission's proposals would be implemented after the election. The Herenigde Nasionale Party under Daniel François Malan and its allies took a contrary view. This opinion camp won the election.

The Central Reference Bureau was commissioned to issue these documents, the core of which was an identity card with a “ passport photo ”, which was based on the Population Registration Act , No. 30 of 1950 and also contained a fingerprint of the holder. There were slightly different reference books for men and women. 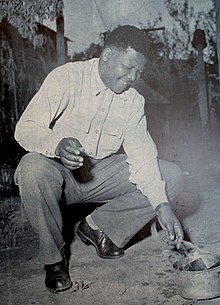 In 1952, the South African government introduced the Natives Abolition of Passes and Co-Ordination of Documents Act, No. 67 of 1952 introduced an even stricter law that obliged black men over the age of 16 to carry a reference book with them at all times instead of the previously used pass book , which contained personal information and an employment biography. Women were only required to take them with them from 1963. For people born in South West Africa , the rules were largely the same.

Blacks were often forced, knowingly or unknowingly, to break these passport laws in order to find work to support their families. The resulting harassment, fines and arrests have been a constant threat to black urban populations. The protests against this humiliating laws fueled the anti-apartheid movement, which from the Defiance Campaign to 1953 about the massive woman protests before in 1952 Union Buildings in Pretoria in August 1956 to the burning of the "working passes" at a police station south of Johannesburg in 1960 led. The latter ended in the Sharpeville massacre , which claimed 69 lives. The rejection of the reference books by the demonstrative public burning of his document by the then ANC chairman Albert Luthuli received special political weight within the South African population . In this way he declared his personal solidarity and that of his organization with the victims of Sharpeville, since the demonstration, which finally ended bloody , had been called by the PAC , under the leadership of Robert Sobukwe .

In the 1970s and 1980s, many black people who had broken passport laws were deported to the impoverished rural homelands . The application of the passport laws became more and more useless and expensive, so they were repealed in 1986. By this time, more than 17 million people had been arrested for violations of the so-called passport laws.

Similar provisions existed for the residence and work permit of persons from the High Commission Territories ( Bechuanaland , Basutoland , Swaziland ), only that primarily the regulations of the Immigrants Regulation Act, Act No. 22 of 1913 (Immigration Act) and the Aliens Act, Act No. 1 of 1937 (Aliens Act) were applied. Violations could be punished with imprisonment or expulsion . The Bantu Administration made more precise regulations, especially regarding the authorized residence area, and only with a limited validity. A distinction was made between urban areas (“white” managed settlement areas) and proclaimed areas (areas with special status for blacks).

These documents also contained information on the name, personal identification number , gender, group affiliation, tribal affiliation, nationality, tax payment requirements as well as a photograph and the fingerprint. In addition, precise details of the employer, the date of employment, the employer's monthly confirmation and the date of the end of employment had to be entered. With the Railways and Harbors Control and Management (Consolidation) Act, Act No. 70 of 1957 , it was forbidden that this group of people were allowed to use the means of transport covered by this in order to get to other areas outside their assigned area.

Migrants from other African countries were prohibited from immigrating to South Africa in a similar manner to look for work.

In Southern Rhodesia , similar rules applied to the control of black men of working age over 16 years. These required the identity card (ID card) and the registration certificate (registration document). The latter was called "situpas" and contained information about the family, responsible chief, area of ​​origin, a fingerprint, body features, tax liability, the employer, the wages and the date of the end of employment. The apartheid system in Southern Rhodesia differed in some fundamental questions from that in South Africa.

There was relief through the sole issue of an identity card for persons over 25 years of age and with the award of a class through ministerial approval in consultation with the Chief Native Commissioner ("Supreme Native Commissioner "). According to this classification, this affected the following group of people: Members of Parliament, chiefs , headmans, landowners, persons with a level of education from Standard VI (around 8th grade), business owners with such a practice of more than ten years and owners of a master farmer's valid for more than five years certificate (a type of agricultural diploma) or any person the Minister of Native Affairs deems appropriate.