Our Lady of the Snow 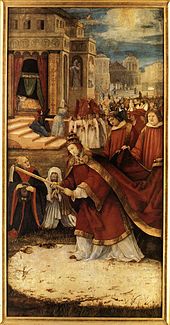 Laying of the foundation stone of Santa Maria Maggiore in Rome, right wing of the Maria Snow Triptych by Matthias Grünewald (around 1517–1519)

Our Lady of the Snows Latin: Sancta Maria ad Nives , it: Madonna della Neve , also Maria Snow , Mary Snow , Maria in the snow or Mary of the Snow , is the popular name of the feast of consecration day of the Basilica of Santa Maria Maggiore in Rome in Church year of the Catholic Church . The Roman Patriarchal Basilica was consecrated on August 5th in 432. According to tradition, Pope Liberius had it built on the Esquiline after a "snow miracle" on the morning of August 5th, 358.

According to tradition, on the night of August 5th, 358, Our Lady appeared to the Roman patrician John and his wife and promised them that their wish for a son would come true if a church was built in her honor on the spot where on next morning snow lay. The couple then went to Pope Liberius, who had the same dream. On the morning of August 5th, there was snow on the highest point of Esquiline Hill in the middle of summer.

Reception of the Battle of Peterwardein

The battle of Peterwardein took place on the feast of Maria Schnee in 1716 and brought a significant victory for the imperial troops under Eugene of Savoy over the Ottoman army.

"Rain on Maria Schnee hurts the ears of corn a lot."