The wasteland is about two kilometers north of Maisach and can be reached via Überacker or Diepoltshofen . 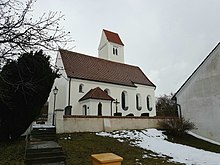 Unterlappach is mentioned for the first time in 807 when the noble sisters Ellanpurc and Engilpurc handed over the church with its own priest to the bishop. In the late Middle Ages, Unter- and Oberlappach were a common village court with bailiff rights, the feudal rights of which lay with different Munich citizens. Later the two places belonged to the cross altar benefit at the Peterskirche in Munich.

Districts of the community of Maisach