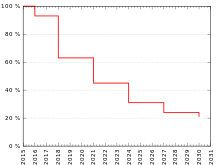 Gradual reduction in sales volumes by 2030

This is supposed to be done by the

Existing systems may initially continue to be used without restriction. However, there are operator obligations to reduce emissions, for example through leak tests and the obligation to close leaks immediately.

Placing bans on the market

Since January 1, 2015, the placing on the market of fire protection equipment with HFC-23 and refrigerators with HFC with a global warming potential of more than 150 has been prohibited.

From January 1, 2020, commercially used cooling devices may only be placed on the market if they contain HFCs with a global warming potential of less than 150.

From 2020, the placing on the market of mono- split air conditioning systems with less than 3 kg of fluorinated greenhouse gases that require HFCs with a global warming potential of more than 750 will be prohibited.

Individual bans affect, among other things, the use of sulfur hexafluoride in magnesium die- casting, also for systems that use less than 850 kg SF 6 per year.

The use of refrigerants (meaning filling with fresh goods!) With a global warming potential of more than 2,500 (GWP) is also prohibited for existing systems with a filling quantity of more than 40 tonnes of CO 2 equivalent from January 1, 2020.

From 2020, XPS foams may only contain HFCs with a global warming potential of less than 150.

Even the manufacturers of fluorinated compounds have to take all precautions to “limit as much as possible” of emissions, including during subsequent transport and storage.

All (refrigeration and air conditioning) systems that contain more than five tons of CO 2 equivalent must undergo a leakage check at least once a year, which is to be arranged by the operator. The tests are to be documented by the operator and the specialist company that carried them out. These records are to be kept for at least 5 years and made available to the competent authority on request.

This annual inspection interval is shortened for systems

In addition, the operators of stationary equipment or refrigeration systems of refrigerated trucks and trailers have to ensure the recovery of the fluorinated greenhouse gases that were contained therein by natural persons with a certificate; This regulation also regulates their certification.

In addition, other technical standards and guidelines apply to refrigeration systems, which in any case specify a regular leak test (at least annually). So the BGR 500, part 2.35, the industrial safety regulation , the VDMA standard sheet 24186 and the DIN EN 378 (parts 1–4).

The regulation obliges the member states to create rules to enforce them and to take measures that effectively discourage violations. In addition to this mandate, which is customary under European law, the regulation regulates a future reduction of their quota by twice the amount by which they have exceeded their quota as a sanction for companies that have exceeded the maximum amount assigned to their quota system for placing partially fluorinated hydrocarbons on the market .

In Germany, violations of certain marketing or use bans constitute a criminal offense under the Chemicals Act ; other violations are punished as an administrative offense.