There are also operations that are particularly important for online algorithms :

Other commonly used operations are:

The implementation of priority queues can be done via AVL trees . Both insert and extractMin can then be executed in O (log n) time. Another possibility is to use partially ordered trees ( heaps ). Here, too, the time complexity is O (log n).

Examples of data structures that efficiently implement priority queues are

The following table shows an overview of the different runtimes of some implementations in O notation .

a amortized
b n is the size of the larger heap

In general, priority queues are needed for many algorithms or even classes of algorithms.

For example, greedy algorithms make use of priority queues, since there often the minimum or maximum of a set must be determined. One of the best-known algorithms of this type is Dijkstra's algorithm for calculating the shortest paths.

You can also use priority queues for best search algorithms. A priority queue is usually used to find the next most promising node in one iteration. An example of this is the A * algorithm for calculating the shortest paths in graphs.

A special algorithm that can also be implemented with priority queues is Huffman coding . The priority queue is used here to find the characters with the lowest probability.

In addition to the classic, single-ended priority queue, there are also double-ended queues. These also support an extractMax operation to extract the element with the largest key. Double heaps offer one possibility for the implementation of such data structures . Alternatively, data structures such as min-max heaps can also be used, which directly support two-end priority queues.

In order to speed up priority queues further, they can be parallelized. There are three different options for parallelization. The first option is to simply parallelize the individual operations ( insert , extractMin ...). The second option allows multiple processes to access the priority queue at the same time. The last option is to perform each operation on k elements instead of just one element at a time. In the case of extractMin, for example, the first k elements with the highest priority would be removed from the priority queue.

A simple approach to parallelizing priority queues is to parallelize the individual operations. This means that the queue works exactly like a sequential one, but the individual operations are accelerated by the use of several processors. The maximum speedup that can be achieved here is limited by the fact that there are sequential implementations for priority queues whose slowest operation runs in time (e.g. binomial heap).

On a Concurrent Read, Exclusive Write (CREW) PRAM model, the operations insert , extractMin , decreaseKey and remove can be performed in constant time if processors are available, where the size of the priority queue is. In the following, the queue is implemented as a binomial heap. After each operation, it must apply that a maximum of three trees of the same order exist and that the smallest root of the trees of the order is smaller than all the roots of trees of the higher order.

The following is the operation in pseudocode .

The concept for constant insert and extractMin operations can be extended to achieve a constant runtime for remove . The decreaseKey operation can then also be implemented in constant time by a remove and a subsequent insert .

The advantage of this parallelization is that it can be used just like a normal, sequential priority queue. But only a speedup of can be achieved. In practice, this is further restricted by the fact that, in the case of a parallel implementation, additional effort has to be made for communication between the various processors.

If concurrent access to a priority queue is allowed, multiple processes can simultaneously perform operations on the priority queue. However, this poses two problems. For one thing, the semantics of the individual operations are no longer obvious. For example, if two processes are running extractMin at the same time , should both processes receive the same item or should they be different? This limits parallelism to the level of the application using the precedence queue. On the other hand, there is the problem of the access conflict, since several processes have access to the same element. 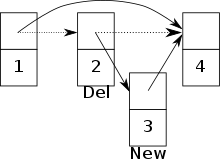 Simultaneous access to a priority queue can be implemented on a Concurrent Read, Concurrent Write (CRCW) PRAM model. In the following, the priority queue is implemented as a skip list . In addition, an atomic synchronization primitive CAS is used to enable a lock- free skip list. The nodes of the skip list consist of a unique key, a priority, an array of pointers to the next node and a delete tag. The delete indicator indicates whether the node is currently being deleted by a process. This means that the other processes know that the node is about to be deleted and can react accordingly, depending on which operations they are performing.

When allowing simultaneous access to a priority queue, care must be taken to avoid potential conflicts between two processes. For example, a conflict can arise if a process tries to add a node, but another process is already deleting its predecessor node. There is a risk that the new node was added to the skip list, but is no longer accessible. ( See picture )

k_extractMin runs on a three-processor precedence queue. The green items are returned and deleted from the queue.

The priority queue can be improved by not always inserting the result set directly into the local queue after a k_extractMin operation. This saves you from having to repeatedly remove elements from a local queue and then reinsert them immediately.

By removing several elements at the same time, a significant acceleration can be achieved compared to sequential priority queues. However, not all algorithms can take advantage of this type of priority queue. For example, with the Dijkstra algorithm, multiple nodes cannot be processed at once. Dijkstra takes the node with the smallest distance to the start node from the priority queue and then relaxes its edges. This can change the priority of the neighboring nodes that are already in the priority queue. By removing the nodes with the smallest distance, it can happen that the processing of one of the nodes changes the priority of one of the other nodes. This node should then only be edited later, but will now be edited earlier. This then marks this node as visited too early. In this case a path has been found from the starting node to this node, but the distance is not minimal. In other words, by using k element operations for Dijkstra's algorithm, the Label Setting property is destroyed.