Oldest written mention in a manuscript from the 9th century 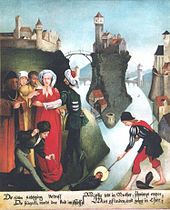 Regiswindis , also Reginswind , Reginswindis or Rensin (* around 832 in Lauffen am Neckar ; † around 839 there at the age of seven) is a local saint in Lauffen am Neckar. According to legend, she is said to have been a count's daughter who was murdered there, and has been a saint since the 13th century. In addition to Lauffen, churches are consecrated to her in other places.

Regiswindis was allegedly the daughter of the border count Ernst from the Upper Palatinate Nordgau , who was enfeoffed with Lauffen by Emperor Ludwig the Pious in the 9th century .

According to legend, the count had his groom whipped for carelessness. This servant's sister was said to have been little Regiswindis' wet nurse, and in revenge she is said to have strangled Regiswindis who was entrusted to her and pushed her down from the castle rock into the Neckar . The wet nurse wanted to throw herself into the river afterwards, but the people who entered stopped her and she confessed to her crime. Three days later the dead girl was pulled out of the Neckar by fishermen from Lauffen, with reddish skin, happy facial expression and clasped hands - according to other sources: with arms outstretched so that her body showed the shape of a cross.

The body was initially buried in the churchyard. A short time later the old church, built of poor wood, leaned towards the grave and collapsed the next day. The building could have been the Martinskirche, mentioned as early as the 8th century, or it could have been a church that can only be verified from the remains of foundations and which once gave the “little church” its name.

The Würzburg Bishop Hunbert then had a chapel built into which the Regiswindis' bones were transferred. In the following years Regiswindis was worshiped and the diocese of Würzburg considered transferring the remains to Würzburg.

According to the literature, Regiswindis was born in the year 832 or a little later and is said to have been 7 years old at the time of her death, which means that the incident must have happened in the year 839 or something after. The oldest written sources on this incident date from the 11th century (Acta Sanctorum Jul.).

In 1227, the then bishop of Würzburg finally canonized Regiswindis. For their further admiration, the foundation stone of the Regiswindiskirche in Lauffen was laid that year , which became the new main church of the city. The body of the saint was reburied in a stone coffin in this church. In the early 16th century, the relic was then kept in a precious silver shrine inside a stone cabinet that stood in the north wall of the choir of the Regiswindis Church. After the battle of Lauffen in 1534 the silver shrine was lost, whereupon the bones were embedded in a simpler tin coffin, which was also lost a little later. The old stone shrine from 1227 stood in the cemetery for a long time before it was moved to the choir of the St. Anna cemetery chapel next to the Regiswindis Church around 1880, which has been called the Regiswindis Chapel since then .

Local coat of arms of Vilchband