Sausages in a dressing gown

Sliced ​​sausage in a batter 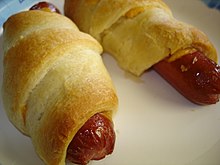 American pigs in a blanket

A sausage in a dressing gown or sausage in a batter is a sausage baked in bread, roll or puff pastry. There are different regional names for this, including a. Wursthuller in Apolda and Wurstwecken in southern Baden.

In the Bergisches Land , here mainly in Wuppertal , Mettwurst (Knacker) or Mettfarce in yeast dough or puff pastry is known as Hetewei , originally the name for hot rolls . It is a carnival-time dish that is mostly eaten on Ash Wednesday . According to tradition, the batter is supposed to hide the fact that meat is secretly consumed during Lent .

In Thuringia and Westphalia , a Knackwurst , a natural casing filled with pork mett , is baked in white bread dough, and occasionally also in dark bread dough, and eaten warm. There are also variants in Butzbach and Dresden . In Vienna , according to the sources, the sausages in dressing gowns were first made in 1905 by Leopold Lahner, the son of Johann Georg Lahner , with Frankfurter sausages . Other variants are made with puff pastry .

The dough is rolled out and cut into rectangular slices, in which the sausages are then rolled up. Depending on the variant, the batter surrounds the sausage completely or only on the long side so that the sausage ends look out of the side of the dough. Sometimes the dough is coated beforehand with mustard , ketchup or horseradish and / or topped with cheese.

Commons : Pigs in a blanket  - collection of pictures, videos and audio files