Walter Braun (born August 7, 1905 in Kempten ; † July 22, 1977 in Memmingen ) was a German headmaster, local politician and home nurse in Memmingen. In addition to many other honors, he received the Federal Cross of Merit on Ribbon in 1973 , and in 1975 the city of Memmingen awarded him the city's Golden Ring of Honor.

Walter Braun came to Memmingen as early as 1910, as the son of Fritz Braun, who was Mayor of Memmingen from 1910 to 1931. There he attended Latin school and one of his teachers was Dr. Julius Miedel , whose successor he later took over as historian and home curator. He then studied mechanical engineering in Stuttgart and then classical philology, German, history and geography in Marburg, Erlangen and Munich.

The following important information is missing from this article or section:
What did Braun do during National Socialism between 1933 and 1945? What was his role? - Pan Tau ( discussion ) 14:17, Jul 21, 2018 (CEST)
Help Wikipedia by researching and pasting it .

In 1934 he entered the school service of the city of Memmingen, and in 1938 he was appointed head of the six-class secondary school for girls. The war interrupted his activities, from 1951 he was again in office as headmaster. A middle school was attached to the school in 1950 and a commercial college was added in 1952. Walter Braun was the director of almost 900 students, around 60 teachers in three or four school buildings.

In 1956, the girls' secondary school and the higher commercial school moved into the old city hospital at Reichhain, which had been converted for school purposes, while the middle school at Hallhof, later at Ratzengraben, remained. At Reichhain, the former high school (in between secondary school) developed into a nine-class grammar school. In 1967 the first “Vöhlin” girls' class passed the Abitur in their own home. Senior Director Walter Braun had passed six Abitur classes before he retired in 1972.

The naming " Vöhlin -Gymnasium" and the use of the former city hospital as a school building are among the original and distinctive ideas of Walter Braun. He wanted to keep the old but, if possible, fill it with new life. 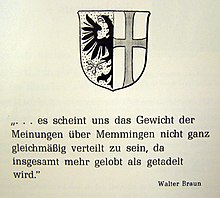 ... in his fine way about "his Memmingen"

Walter Braun was a city councilor from 1949 until his death.

Since 1936 he was Miedel's successor home nurse, now officially in honorary office and connected as chairman of the Heimatpflege Memmingen eV association - important tasks for him were e.g. B. the continuation of the Memminger Geschichtsblätter , the local supplement of the "Memminger Zeitung" Der Spiegelschwab - he worked here tirelessly for 41 years.

In 1948, under the leadership of Otto Merkt, nine local chairmen founded the Association Heimatdienst Allgäu eV, which was soon renamed the Heimatbund Allgäu . Walter Braun became deputy chairman, which he remained until his death.

Swabian Heimattag - his initiative - since 1949 the home nurses in Bavarian Swabia have been organizing the Swabian Heimattag, a working group for those involved in cultural and nature conservation.

Walter Braun has done a very special kind of work and achievement for his Swabian homeland with the Swabian inscription card index: “... when the author died unexpectedly in July 1977, he left an extensive and unique work with around 18,000 index cards for Swabian historical research and homeland maintenance Texts from almost all areas of history ... ... taking into account graves and corridor stones, house signs and inscriptions on monuments, votive pictures and frescoes ... ... Walter Braun has done pioneering work with his initiative that benefits various scientific disciplines, in particular regional and local history ... "

In addition to many other articles and writings, his articles in MEMMINGER HISTORYBLÄTTER (annual books since 1912) - published by Heimatpflege Memmingen eV