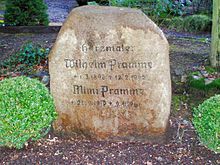 Wilhelm Pramme (born March 1, 1898 in Halberstadt , † February 12, 1965 in Wernigerode ) was a German painter. He belongs to the Harz painters and was a member of the Wernigerode artists' colony . This was founded after the Second World War by various visual artists who ended up in Wernigerode at the end of the war within the Kulturbund for the democratic renewal of Germany .

Pramme was born in Halberstadt in 1898 as the son of a cigar maker and learned the trade of lithography as a teenager after the early death of his father - a profession in which he also worked temporarily in Zwickau , before he stopped working in 1916 due to severe tuberculosis. Had to give up illness and thus began to earn a living by selling his pictures and playing the theater. As a student, Pramme maintained close friendships with the later painter Walter Gemm and the later writer Bert Brennecke , to whom he remained connected throughout his life.

Many of his works were created during his travels through Germany with Walter Gemm as well as during his travels through numerous countries around the world (including Italy, Greece, Egypt, Indonesia, India and Afghanistan), which he also financed through the sale of pictures. The main motif of the painter, however, always remained the Harz, especially the area around his adopted home Wernigerode. The painter also campaigned for the Harz region outside of his artistic work: Pramme gave slide shows on the subject of nature conservation, led hiking groups through the Harz Mountains and participated in the mapping of plant occurrences.

Wilhelm Pramme was married twice, the second marriage he entered into in 1951 with Mimi Bruns. In February 1965 Pramme died of a heart attack, only a year later his second wife also died, who in her will donated the majority of his artistic estate to the Harz Museum in Wernigerode. A memorial stone for Pramme, which was donated by a private initiative in 1982, is located - difficult to reach for visitors - at the Landmannsklippe in the Harz National Park at N51 ° 47.127 E10 ° 40.973.