Days of the week (Thailand)

Each day of the week in Thailand is assigned a certain patron god according to an astrological rule (which is influenced by Hindu mythology ). 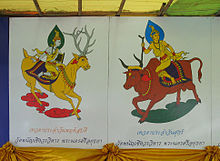 Just as in Hindu mythology every god has a mount, so is a certain planet and a certain color assigned to him. The patron god of Sunday, for example, is Surya , whose traditional color is red. These day colors are the traditional birthday colors in Thailand. For example, every year on December 5th, the whole country is decorated with objects in yellow color, people wore yellow clothes because King Bhumibol Adulyadej was born on a Monday.

A Buddha "for every weekday" (Wat Chet Thaeo, Chiang Mai)

Each weekday is also assigned a Buddha statue with a certain hand position ( mudra ) , since in ancient times it was assumed that some events in the life of the Buddha took place on certain days of the week. In Thai temples ( wat ) one often sees a series of eight different Buddha statues, to which the believers make small offerings.

For certain Brahmanic ceremonies it is necessary to establish a connection between the eight cardinal points and the individual days of the week. Important celebrations, such as a wedding or the ordination of a monk, need an orientation according to the compass in order not to end in disaster. There is a common belief in an unlucky as well as a lucky direction for each day. But since the compass now shows eight cardinal points, but the week only has seven days, Wednesday is often shown in two parts - as Wednesday morning / morning and Wednesday evening / afternoon.