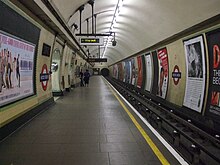 Platform to the north

Wood Green is an underground station on the London Underground in the London Borough of Haringey . It is in the Travelcard tariff zone 3, at the intersection of the main roads High Road and Lordship Lane. In 2013, 12.44 million passengers used this station served by the Piccadilly Line . The Mall and Haringey County Council are close by.

Like all stations in the northern part of the Piccadilly Line, this one was designed by Charles Holden . The station building is a well-preserved example of the Modernist style for structures along the Piccadilly Line. The dominant building material is red bricks. Due to its location at the corner of a street crossing, the main facade is curved. This is flanked by two ventilation shafts with shops. Obergaden let daylight fall into the elliptically shaped counter hall. The building has been a listed building ( Grade II ) since 2011 .

To the north of the station there is an additional stub track. It is not used in regular traffic, however, delayed trains can be turned around here, so that there is no need to continue to the terminus. Alexandra Palace station is around 700 meters to the west and was originally also called Wood Green . To avoid confusion, it was renamed in 1984.

The station opened on September 19, 1932, when the Piccadilly Line was extended from Finsbury Park north to Arnos Grove . Lordship Lane and Wood Green Central were originally also discussed as station names .

On March 16, 1976, the Provisional Irish Republican Army carried out a bomb attack here. An explosive device exploded in an empty train that was on its way to the dead end to turn around. A person was injured on the platform by flying glass fragments. Due to the terrorist attacks on July 7, 2005 , the station was closed for a few weeks; it reopened on August 4th.

In plans from 2015, the station is entered as a possible stop for Crossrail 2 on the section between New Southgate and Seven Sisters .