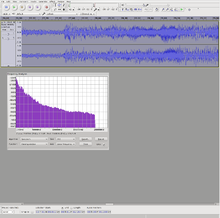 The graphical user interface of Audacity is implemented using wxWidgets

wxWidgets (formerly wxWindows ) is an open source GUI toolkit for developing graphical user interfaces . It is developed in the programming language C ++ and licensed under a modified LGPL , which also allows the distribution of derived works under its own conditions. Although wxWidgets is implemented in C ++, there are connections for a large number of other programming languages. Thanks to its platform independence, wxWidgets enables the GUI-specific code of a program to be compiled and executed on a wide variety of platforms with little or no modification.

wxWidgets is used in a number of well-known projects, for example the audio editor Audacity , the strategy game 0 AD , the FTP client FileZilla , the Code :: Blocks development environment and, in the past, Bitcoin Core .

The programming interface enables the development of GUI programs for Windows , Unix , Mac , Symbian OS , Palm OS and Windows CE . wxWidgets abstracts platform-dependent functions, for example interprocess communication (IPC), and offers additional functions, for example a hash table . Some functions such as wxMetafile or OLE are implemented individually in wxWidgets for the respective platform. For better portability wxWidgets waived exceptions (English: exceptions ) and templates . The API includes over 450 classes with over 5000 functions. The most important functionalities cover the following areas:

In 1992 the first edition appeared, which was for XView and MFC .

In 2003 the wxWidgets Software Foundation was founded, which was dissolved after a few months. A year later wxWindows was renamed wxWidgets at the request and payment of Microsoft .

Support of additional languages ​​for wxWidgets