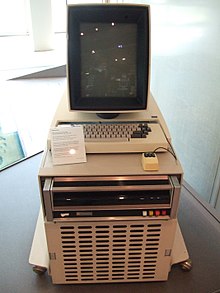 The Xerox Alto was developed in 1973 at the Xerox PARC research center and was the first workstation with a graphical user interface (GUI for short) that was controlled via a computer mouse . With a typewriter-like keyboard, a 3-button mouse, an additional small 5-button chord keyboard for special commands, an object-oriented operating system and an Ethernet network interface, it pioneered the future of personal computers ; many of the innovations in the Alto were later adopted by Steve Jobs for the Apple Macintosh .

The first designs were created in 1972 under the developer Butler Lampson . The first machines were manufactured by Clement Designlabs in collaboration with Doug Fairbairn (Xerox PARC). Other developers involved were Edward M. McCreight and Charles P. Thacker , Robert Metcalfe and David Boggs . The CPU consisted of a bit-slice processor built on the 74181 chip from Texas Instruments and operated at a clock rate of 5.8 MHz. The 16-bit shift registers and the entire I / O were controlled by microcodes and were connected to the main memory and the ALU via a parallel 16-bit data bus . The main memory was 128 kB and could be expanded to 512 kB.

The removable hard drive (from Diablo Systems , a company that was later taken over by Xerox) held 2.5 MB. Since these drives (Diablo model 31 and 44) ​​were front loaders, the system could be expanded with a second disk drive. The case of the computer was roughly the size of a small freezer. Because of its progressive concept, the computer was often referred to as the first personal computer or the first workstation , although its technical structure corresponded to a minicomputer . The knowledge gained in the first few years led to numerous improvements in hardware and software based on the first version Alto I , which made both computing power and usability more efficient and was finally implemented in the Alto II in 1976 .

The standard configuration consisted of a monochrome monitor with a resolution of 606 × 808 pixels and an uncoded keyboard with 61 keys. He already had a three-button mouse , used raster graphics , windows , menus and icons . It could be connected to other computers via the Ethernet protocol at a transmission rate of 3 Mbit / s, which means that, in addition to exchanging data, e-mail can also be used via the connected intranet . In addition, a Diablo HyType type wheel printer and a five-finger chord keyboard could be connected.

The manufacturing cost was 12,000 US dollars (which corresponds to a value of 68,894 US dollars in terms of purchasing power in 2020); Lead developer Charles P. Thacker estimates that the retail price would have been $ 40,000 in 1973 (the Xerox Alto was not officially on sale at the time, but only from 1978 at a significantly lower price of $ 32,000) . Due to the enormous success of the Alto, around 2000 pieces were produced in a period of ten years. The computer was mainly used in research and development.

What is special about the WYSIWYG surface used is that the monitor could display a US letter sheet 1: 1 in portrait format. Based on improved hardware of the Alto, a Lisp machine called Dolphin was also developed at PARC. The Alto also became known through the object-oriented programming language Smalltalk-80 , which was developed on it together with the high-level language Mesa and its successor Cedar .

From 1980 to 1981, Xerox Alto computers were used in the Xerox System Development Department for the development of the successor Xerox Star , which was the first commercial use of a GUI.

On October 21, 2014, the Xerox Alto source code and other resources were published by the Computer History Museum .