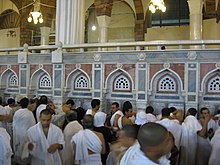 The Zamzam fountain in Mecca

Zamzam ( Arabic زمزم), occasionally also Zemzem and "Semsems Quell" , is the name of a fountain in the courtyard of the great mosque in Mecca in Saudi Arabia . The water of the fountain is said to have its origin in paradise and therefore has a healing effect.

Role in the religious life of Muslims

A small bottle of Zamzam water

Pilgrims drink the Zamzam water on site as part of the pilgrimage ritual and bring small amounts home with them. Typically, each pilgrim takes between 10 and 20 liters of Zamzam water. Commercial trade in the real Zamzam water and also the commercial export of the same are prohibited under Saudi law . Nevertheless, there is a demand for water in many Islamic countries and in the diaspora, which is partly satisfied by traders through counterfeiting. In Mecca itself there is a trade in water during the Umra and Hajj . Here, however, the largest share of the price must be attributed to the purchase of the robust and disinfected canisters, which the pilgrims have to have sealed separately in the terminals of the King Abdul Aziz airport in the plastic carrier bags provided for this purpose if they want to take them abroad.

According to Islamic tradition, it is the source that God made for Hagar and her son Ismail (the first son of Abraham ) when they were dying of thirst in the desert. Exhausted and afraid, Hagar is said to have run back and forth between the Safa and Marwa hills to find some water. After the seventh run, she saw the water gushing at her son's feet. As a result of the new spring, people settled in the otherwise arid valley, which is said to have represented the beginning of the city of Mecca. In memory of this search and effort, the pilgrims still walk back and forth between the two hills - which are now inside the great mosque - seven times during the Hajj pilgrimage (Arabic: Saʿy ).

Promotion and purification of the water

The water is slightly alkaline and resembles seawater in its mineral composition, but the salt concentrations are much lower. Today the water is pumped from the well with the help of electric pumps (instead of ropes and buckets in the past). The water quality is controlled and ensured by filtering and UV disinfection. In order to meet the increased demand during the pilgrimage, water is temporarily stored in large tanks. The aim of various urban and hydraulic engineering measures in the water catchment area is to adequately supplement the source horizon with precipitation.

In contrast to other cleaning methods, Zamzam is not kept germ-free with chlorine but with UV radiation in order to prevent the risk of infection or epidemic. For the maintenance and cleaning of the dispensing systems in Mecca, employees in overalls are responsible, who work on behalf of the royal family for the largest construction company in the country, the Saudi Binladin Group .

According to Islamic tradition, it was ʿAbd al-Muttalib ibn Hāschim , the grandfather of the Prophet Mohammed , who, after having been forgotten over time, dug up the Zamzam spring again based on a vision. He also excavated the treasures that Mudād ibn ʿAmr had once buried there. The distribution was decided by means of arrows , with ʿAbd al-Muttalib and the Kaaba winning over the Quraish . They wanted to consult an outside arbitrator about their share in Zamzam, but on the way there both parties ran into water shortages until the camel of ʿAbd al-Muttalib came across a spring. Regarding this as God's decree, the Quraish granted him Zamzam.

The office of watering the pilgrims ( siqāya ) was connected with the source Zamzam . After the death of ʿAbd al-Muttalib, this was initially transferred to Abū Tālib , but he sold it after he was impoverished to pay off a debt to his half-brother al-ʿAbbās . Al-Azraqī , citing older authorities, reports that al-ʿAbbās forbade the use of the spring water to cleanse the body. From then on it could only be used for drinking and ritual washing . After his death, the source and the siqāya office remained in the hands of his descendants, the Abbasids .

At the time of ʿAbdallāh ibn ʿAbbās , the Zamzam fountain stood in the open air and was surrounded by two basins. One of them was located between the fountain and the corner of the Kaaba and was used to water the pilgrims, the other was behind the fountain and was used for ritual washing. From the latter, the sewage was channeled out of the mosque courtyard through an underground channel. Those who drew the water from the well alternately poured it from hoses into one and the other basin.

After taking power around the middle of the 8th century, the Abbasids took care of the Zamzam fountain and gradually expanded it. Al-Mansūr had the fountain covered with marble slabs and provided with a wooden grille.