This article deals with the central locking used in camera construction. For the rim lock of the same name, see wheel nut . 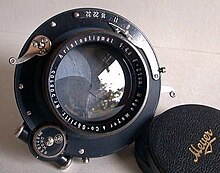 Central shutter in the middle of an aristostigmatic

The central shutter (or lamellar shutter ; English central shutter or lens , leaf , blade , diaphragm shutter ) is one of the two common design principles for shutter in camera construction alongside the focal plane shutter . Another simpler type of closure without slats or curtains, between the central and focal plane shutter, is the single or double guillotine shutter or the leaf shutter for cheap cameras. A rotor or rotation lock is also possible .

A mechanical shutter is not absolutely necessary for a digital camera , an electronic shutter is used here . For example, the preview is generated on the display without the constant opening and closing of a shutter. Instead, the sensor is read out at a certain frequency and thus emptied in order to take a new image. Often the mechanical shutter is then only used to end the actual exposure so that no further charges arise from further incident light when the pixels are read out. Depending on the sensor used, this could lead to smearing or incorrect exposures.

The central shutter is typically located “centrally” in the lens between the lenses .

The central shutter consists of several lamellas grouped concentrically around the optical axis , which when the camera is triggered snap back synchronously from this axis and release the path of the light onto the film. In contrast to the iris diaphragm , which is constructed in the same way , the central shutter closes completely in the rest position, so no light can pass through the shutter curtain.

In the case of single -lens reflex cameras , however, the central shutter initially closes after it has been released, as all image settings were previously made with the aperture open . Then the mirror flips up and the central shutter opens again for the duration of the exposure and then closes again. The mirror then swivels back into the beam path and the film magazine is closed. Only now is the film transported (either manually or automatically) and the shutter opens again. This does not apply to the focal plane shutter, because it is behind the mirror, close to the film plane.

For optimal exposure , the central shutter must be positioned in the beam path like an aperture , otherwise there may be less exposure at the edge of the image.

While mechanically controlled central shutters such as panels usually have a larger number of slats, modern electrically or electronically controlled shutters can, depending on the design, manage with fewer with the same performance.

Advantages of the central lock:

Disadvantages of the central lock:

Large format and view cameras are actually only built with a central lock due to the design-related parameters.

In 35mm and viewfinder cameras , it is found in the vast majority of cameras for the same reason. A notable exception here are the Leica M and technically related cameras with interchangeable lenses. In the field of miniature - SLR is the central locking is only in individual special lenses are used (eg for portrait photography ).

In the medium format , both types of closures are about equally represented in the sub-professional sector again outweigh Central and Guillotinenverschlüsse.