The electric eels ( Electrophorus ) are a genus of fish from the family of the knife eels (Gymnotidae) in the order of the New World knife fish (Gymnotiformes). Electric eels are therefore not eels as their name and appearance suggest.

For almost 250 years, the genus was considered monotypical with Electrophorus electricus as the only species. In 2019, two other electric eel species were described, Electrophorus varii and Electrophorus voltai . Electric eels live in northern and central South America, from the Guiana Mountains in the north to the Amazon lowlands to the rivers that drain the Brazilian Shield to the Amazon in the south.

Electric eels have electrical organs , with whose weak electrical fields the animals orientate themselves and communicate with each other, but with which they can also emit strong electrical surges with voltages of up to 860 volts. The latter are used for the defense and stunning or killing of prey animals. The electrical organs take up about four fifths of the total length of the fish. The body cavity is therefore very small. The animals have three different electric organs: Dorsal front is the main organ that Sachssche organ located behind the dorsal and on Hunter organ located anteriorly . Each of these organs consists of a large number of flat, electricity-generating elements (electrocytes), each of which is located in a connective tissue chamber. All of the electrocytes are usually not active at the same time. Only the strongest electric shocks are generated by the joint activity of all up to 6000 electrocytes. 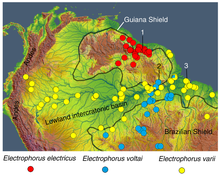 Electrophorus electricus occurs in the mountainous region of Guiana and Electrophorus voltai lives in the rivers that drain the Brazilian Shield to the north, towards the Amazon. In the habitat of both species, the water is usually rich in oxygen and has a low conductivity (<30 µScm). The waters have rocky bottoms and there are rapids and waterfalls. In the habitat of Electrophorus varii in the Amazon lowlands, on the other hand, the water is normally poor in oxygen, the rivers flow sluggishly, the soil is sandy or muddy and there are no rapids and waterfalls. In white water rivers , the conductance is relatively high (60–350 µScm),whereasin black water rivers it is low (<30 µScm).

In September 2019 a study was published in which it was proven that three cryptic species were hidden under the name Electrophorus electricus , which outwardly look very similar, but genetically differ significantly. The designation Electrophorus electricus now only applies to the electric eels of the Guiana mountains . The electric eels, which occur in the Amazon lowlands from the Ecuadorian and Peruvian Andes in the west to the mouth of the Amazon in the east, were re-described under the name Electrophorus varii , those found in the southern Amazon basin in the rivers that drain the Brazilian Shield towards the Amazon Electric eels as Electrophorus voltai . The three species separated from each other in the Miocene and Pliocene . The genus Electrophorus forms together with the species-rich genus Gymnotus the family of knife eels (Gymnotidae) in the order of the New World knife fish (Gymnotiformes). However, there is also the view that the genus should be placed in a separate monotypical family Electrophoridae.

Alexander von Humboldt already observed electric eels on March 19, 1800 on the occasion of his research trips in the Amazon region as well as a peculiar method of the Indians to catch them:

“The Indians said they wanted to fish with horses […]. It wasn't long before our guides came back from the savane, where they rounded up untamed horses and mules. They brought about thirty of them and drove them into the water. The unfamiliar noise of the pounding of the horses drives the fish out of the mud and stimulates them to attack. The black and yellow colored eels, resembling large water snakes, swim to the surface of the water and crowd under the belly of the horses and mules. [...] The eels, stunned by the noise, defend themselves by repeated blows from their electric batteries. For a long time it seems that victory should remain with them. Several horses succumb to the invisible strokes by which the most essential organs are struck everywhere; numb from the strong, incessant blows, they sink under. Others, snorting, with bristling mane, wild fear in their staring eyes, pull themselves up again and try to escape the storm that is raging around them; they are driven back into the water by the Indians. But some escape the active watchfulness of the fishermen; they win the bank, but stumble with every step and throw themselves in the sand, exhausted to death, their limbs frozen by the electric shocks of the gymnastic notes. Before five minutes passed, two horses drowned. The five-foot-long eel presses itself against the horse's belly and gives it a blow along the entire length of its electrical organ; the heart, the intestines and the celiac plexus of the abdominal nerves are particularly affected. […] The horses are undoubtedly not beaten to death, only stunned; they drown because they couldn't get themselves together while the fight between the other horses and the gymnastic grades continued. We did not mean otherwise than that all the animals that are used for this fishery must perish one after the other. But gradually the heat of the unequal fight subsides and the exhausted gym grades dissipate. They now need a long rest and plenty of food to make up for the loss of galvanic power they have suffered. […] The gymnastic grades swam shyly to the bank of the pond, and here they were caught with small harpoons attached to long ropes. If the ropes are quite dry, the Indians feel no blows when the fish is pulled out into the air. In a few minutes we had five large eels, most of them only slightly injured. "

In experiments in which electric eels were confronted with the dummies of crocodile heads and human arms, they showed the behavior described by Humboldt, stretched themselves out of the water and snuggled their belly against the supposed opponent in order to drive them away with electric shocks.