Alan Cox (born July 22, 1968 in Solihull , England ) is a British software developer and one of the first and best-known Linux kernel developers.

Alan Cox began his Linux career doing one of the first network installations at the University of Wales in Swansea . Out of an interest in the free Unix software, he began to read the source code and began troubleshooting. His first own project in the Linux kernel was the network module, which he implemented from scratch. His work quickly made him one of the most important developers of the Linux kernel.

Due to his good relationship with Linus Torvalds and the intensive work on the kernel, Alan Cox became the official maintainer of the kernel versions 2.2.x. After this version was released, he worked on the 2.4.x kernel versions, where he maintained a separate branch (signed with the abbreviation “ac” in the version text, for example: 2.4.13-ac1), which is known for its high level of stability and security. 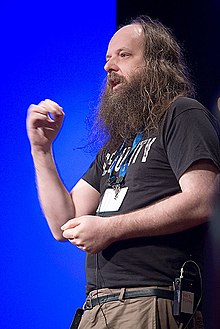 Alan Cox was long after Linus Torvalds the most important developer of Linux. Since the release of the 2.6 kernel, it has played a less central role, but is still responsible for some subsystems of the kernel. He is best known for his kernel fixes and mailing list activity. Linus Torvalds jokingly describes Alan Cox in this quote:

“Note that nobody reads every post in linux kernel. In fact, nobody who expects to have time left over to actually do any real kernel work will read even half. Except Alan Cox, but he's actually not human, but about a thousand gnomes working in under-ground caves in Swansea. None of the individual gnomes read all the postings either, they just work together really well. "

“Note that nobody reads all the posts on the Linux kernel mailing list. The fact is, nobody who wants enough time to somehow work on the kernel will read half of it. Except Alan Cox. But he's actually not a human, but about a thousand gnomes who work in the caves of Swansea. The individual gnomes also don't read all of the posts, they just work very well together. "

In 2003 Cox received the FSF Award . In September 2003, Cox retired from Linux development for a year. During this time he wanted to complete his Master of Business Administration . To this end, he took to his employer Red Hat a holiday ( sabbatical ). At the end of 2004 he returned.

In an interview in March 2005, he said of Linus Torvalds:

“Linus is a good developer, but is a terrible engineer. I'm sure that he'll agree with me. "

“Linus is a good developer, but a terrible engineer. I am sure that he will agree with me. "

According to Cox, Linus Torvalds is a good developer, but loathes bug fixing and beta testing. Both developers have different ideas about Linux. While Linus Torvalds values ​​ease of use and maintenance of the kernel, Cox focuses on stability, and in his opinion this goal justifies a code "hack".

After ten years at Red Hat, Cox announced on December 23, 2008 that he was planning to move to Intel in mid-January 2009 . Before that he was technical director at cymru.net and worked for companies such as NTL , 3Com , Sonix and Adventure Soft .