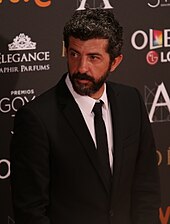 Alberto Rodríguez Librero (born May 14, 1971 in Seville ) is a Spanish director who is best known for his films 7 Virgins and La isla mínima - Land of Murderers .

Rodríguez studied image and sound engineering at the University of Seville and began making short films during his studies. In 2000 his first feature film, El factor pilgrim , was released, with which he has already celebrated success. The breakthrough came in 2005 with his work 7 Virgins .

In 2013, Kings of the City was nominated in 16 categories for the Spanish Goya Film Award and won two of them. With La isla mínima - murderers country in 2014 his most successful film was released. The thriller, set in the marshland of the Guadalquivir in the extreme south of Spain , tells the story of several murders in 1980, which are investigated by two police officers of different ideologies. The film won ten Goyas , including Rodríguez received an award for best director. The film grossed around five million euros, making it one of the most successful Spanish films in recent years.

His next film, El hombre de mil caras (2016) earned him another Goya for best director.