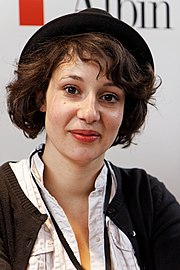 Alice Zeniter grew up as the daughter of an Algerian father and a French mother in the small village of Champfleur and attended school in nearby Alençon . Her grandparents were " Harki ", Algerians who were in the service of the French colonial power during the War of Independence. During her school days she wrote her first novel. Published in 2003, the story is about two girls who take up a dog during the war and try to survive in a devastated country. After graduating from school, she moved to Paris to study at the École normal supérieure . Since 2013 she has been a PhD student in theater studies at the University of Paris III .

In 2008 she left Paris and moved to Budapest , where she taught French at the Eötvös Loránd University and worked as assistant to Árpád Schilling for Krétakör at the theater . During this time, inspired by topics such as suicide , the Danube , Attila József and the year 1956, she began to write her second novel, which was finally published in 2010 under the title Jusque dans nos bras by the Paris publisher Albin Michel. The French daily Le Monde praised Zeniter for pulling out “all the stops of good feelings” when telling the story. In the same year she was awarded the Prix ​​littéraire de la Porte Dorée and a year later the Prix ​​littéraire Laurence Trân .

In 2013, Sombre Dimanche was her third novel, for which she won several French literary prizes. The story takes place again in Budapest and is about the young love between the Hungarian Imre and the German Kerstin. For her fourth novel, Juste avant l'oubli , published by Flammarion , Zeniter won the Prix Renaudot des lycéens. The book is about a doctoral student who is researching the life of a thriller author in the Hebrides . The shadow of the author who has committed suicide soon threatens to destroy the relationship between the young woman and the boyfriend who will follow her.

In 2017 her short story There is no more summer in the anthology L'Amour toujours - Toujours l'amour? Young French love stories out. In the same year, Zeniter's fifth novel, L'Art de perdre , was published, her only novel to date that has been translated into German. He tells of the fate of a Kabyle family of Algerian descent in Algeria and France over several generations . The first part describes the life of the grandfather, Ali, from the end of the Second World War to his flight from his village in Algeria to France in 1962, the year Algeria gained independence. The second part is about the life of the family in France. The focus is on Ali's eldest son Hamid. The part ends with the birth of Hamid's first daughter. At the center of the third part, which takes place in the present, is a daughter of Hamid who is visiting her grandfather's family on a business trip to Algeria. L'Art de perdre made it into the final selection for the Prix ​​Goncourt in the year of its publication and brought Zeniter the literary prize of the French daily Le Monde and the Prix ​​Goncourt des lycéens .