Gable frieze of the old guard 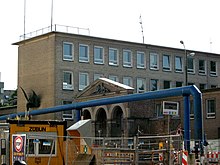 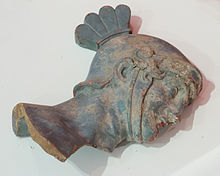 Relic of the gable frieze after the demolition, exhibition in the Cologne City Museum

The old guard next to the Friedrich Wilhelm high school on Waidmarkt in Cologne was one of three new guard buildings that the Prussian military administration had built in agreement with the city in 1840/41. The main guard on the Heumarkt was demolished in 1877, and the similar guard building, the Alte Wache armory , now serves as the Cologne City Museum for temporary exhibitions.

The Alte Wache on Waidmarkt was planned for 30 men. The architect on the square , Schuberth, adopted the classicist forms of a pavilion built in 1825 by architect Maximilian Joseph Hurtault in the park of the castle of Saint-Cloud near Paris. The portico of the building and the gable relief of two resting warriors, designed by the sculptor Friedrich Joseph Porcher , survived the Second World War and the collapse of the historical archive in Severinstrasse during the construction of the north-south light rail on March 3, 2009.

The three-arched portico of the Alte Wache, which is a listed building as a testimony to Cologne's military buildings, was slightly damaged by the fallen roof sections of the city archive on the right outer pillar and the right outer wall, whereby the vault showed no cracks. In order not to hinder the rescue work of the emergency services, the portico was laid down in consultation with the city curator. The individual parts have been secured and stored for later reconstruction. Parts of the gable frieze could be seen in the exhibition “Der Waidmarkt. Drunter und Drüber ”(October 8, 2011 to February 18, 2012) in the Cologne City Museum .