Together with Máximo Gómez, Maceo is considered to be the most important military leader in the Cuban Wars of Independence (1868–1898) against the Spanish colonial power that had occupied Cuba since the conquest of 1492 . When in 1878 the political leadership of the Cuban independence movement saw no prospect of military success and concluded a peace treaty with Spain , Maceo resisted. He wanted to continue the struggle until the most important social goals of the revolution such as the abolition of slavery were achieved. Due to the racist propaganda against him, however, he limited himself to organizing the fight from exile. The so-called Little War (Spanish: La Guerra Chiquita ) ended unsuccessfully for the Cuban side in 1881.

The Cuban revolutionary and poet José Martí finally succeeded in persuading Antonio Maceo and the former commander in chief of the Cuban revolutionary troops, Máximo Gómez, to restart the war of independence . Between 1895 and 1898, the Spanish colonial power was decisively weakened, so that the United States was able to occupy the island of Cuba without major resistance in the war against Spain ( Spanish-American War ) in 1898. Maceo's great military success is based in particular on the fact that he managed to extend the guerrilla war to western Cuba, where the Spanish colonial power's most important economic resource, sugar production, was located.

The importance of the mulatto Maceo also lies in the fact that he was able to add the component of the struggle for social justice to the revolutionary war, which was originally started by the landowners of eastern Cuba.

Antonio Maceo is buried on Finca El Cacahual in Havana. 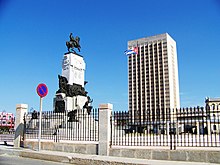 There are monuments dedicated to Antonio Maceo on the Revolution Square in Santiago de Cuba and on the Malecón of Havana near the Hermanos Ameijeiras Hospital.