Cashier at her till

The previous designation worker was dropped, as the worker should include anyone entrusted with a specific activity and the term worker is sometimes understood to be very limited and politically charged. According to most definitions, a marching soldier is not a worker, but according to this understanding it is a worker.

For the activities of a worker, evaluation criteria are used as part of the job evaluation.

For a long time, the factors defined by Rohmert were used for this :

According to Rohmert, the evaluation criteria of work activities should be met in ascending order if the respective work performance is to be maximized. Typical work environments, however, often suffer from deficits, the avoidance of which should be pursued by the work organization.

The Rohmert schema has come under criticism because, on the one hand, feasibility should be a self-evident prerequisite for work activity and, above all, because job satisfaction has found widespread use in practice, but the term is scientifically very controversial and at least "not a useful criterion for evaluating Represents work ” .

The scheme by Luczak et al. from the core definition of ergonomics is: damage-free, executable, tolerable and impairment-free working conditions.

Winfried Hacker's system became even more important , as it is divided into executable, harmless, impairment-free and personality- enhancing.

The aim of the exact description of a worker is to look for optimizing a work system. Since the worker is viewed as one of seven system elements, the work organization can be geared to it by influencing the knowledge and skills of the worker.

A runner (athlete) may serve as an example. The resources are running track, shoes and clothing. The training of the runner via the division of a race, optimized training methods up to psychological influencing of one's own psyche or that of the opponent are learnable skills which can give the runner an advantage in competitions. It is understandable that in this example the greatest development potential is to be found in the worker - automation is not a solution for this work system. Similarly, knowledge and skills can be determined for industrial or office workers, drivers, police officers, doctors, etc., the mastery of which improves the performance of the work. Improvements can be sought in increasing speed, reducing the frequency of errors, reducing work-related fatigue or risk of injury, etc.

Structure of the types of process 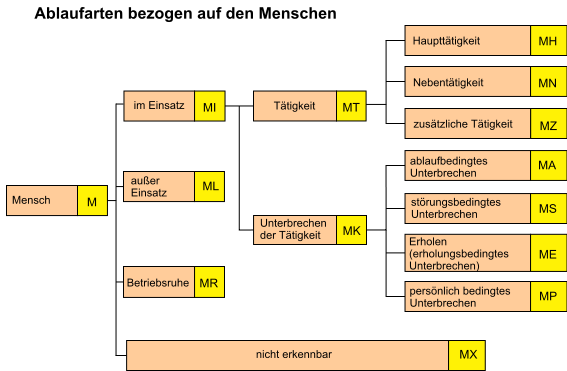 For the analysis of work activities, REFA provides a structure that is used for both observations and work design.

The primary level of structure distinguishes the worker

The activity is divided into (analogous to usage )

The interruptions in activity (also analogous to use ) are divided into four possible types of interruption.