A working system is in the organization theory the subsystem of a production process in which exactly one object is fulfilled. So it is a system for completing work tasks. According to DIN EN ISO 6385: 2004, a work system is defined as

Work systems were defined in the course of scientific management in order to determine the starting parameters for optimization. They thus reflect the perspective of work design and in this sense they are still relevant. Other perspectives, for example in quality management , developed comparable models with similar elements, such as the quality management process model .

Description of a work system

According to REFA , a work system is described by the following seven system elements: 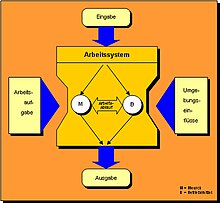 The work item is the task to be performed, for example "drilling the mounting plate" or "writing the meeting minutes".

The work process is a more or less detailed description of the tasks necessary to fulfill the work task, which are then referred to as work execution .

The input is all the necessary resources that are necessary to complete the work task. In addition to materials, this also includes information. Depending on the focus of the analysis, not all of the inputs are given in the analysis. For example, in the “brazing copper pipe” task, the input “oxygen” (from the air) is often ignored and only the inputs that are explicitly provided are taken into account.

The output is accordingly all results of the completed work task. As with the input, the focus is crucial for the mentioned outputs. For example, any output “exhaust gas” was largely ignored when performing the task “transport pallet”. Today all expenses of a work system, for example also emissions or waste in the sense of an ecological production economy, should be taken into account when considering the work system. The joint production is thus the norm of production.

The person (also referred to as a work person ) is the person or persons who control the work process or carry it out themselves. He is thus described as fulfilling a work task, including the skills required for this. The description is therefore normative and can be used as a basis for personnel selection .

Like humans, equipment and work equipment are described normatively so that the work system becomes comprehensible. The regulations form the work organization , the change of which is called work structuring.

This classification is also retained by specialist authors, sometimes with different terminology; The authors Günther / Tempelmeier, who are influential in the German-speaking world, describe the structure of a work system as the interaction of people ( workers ) and machines ( operating resources ) within the framework of a production ( work task and workflow ) by processing work objects , basic data and planning data ( input ) for Manufacture of products and feedback ( output ).

Depending on the structure of the work tasks and work processes, there are different types of work systems. The Work System Types screen presents an outline. In stationary work systems, the material flows while people and work equipment are stationary. Mobile work systems are created on immobile material (these are not only construction sites in the open air, but also places in factories where, for example, systems are built) to which people and work equipment have to be brought.

The remaining terms in the figure are explained below.

Individual work is the term used to describe work structures in which all the work required to complete a task is combined in one workplace. It is to be distinguished from group or team work .

There are various definitions for group work . In the present context - and this has also become the most widespread opinion in the meantime - the semi-autonomous working group is meant, meaning that several employees work together over a longer period of time and decide for themselves about the division and division of work.

Hiring work is the fulfillment of the work task of a work system at one point by one or more people.

The number of jobs, i.e. places where work has to be done, exceeds the number of employees in the work system. The employees monitor the progress of the work on largely automatically running systems and intervene in the event of malfunctions or material supply.