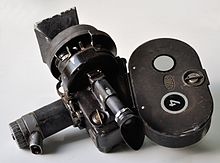 The ARRIFLEX from the Munich-based group of companies Arnold & Richter Cine Technik was the first series-produced SLR film camera for normal film recordings. The ARRIFLEX was presented to the public in 1937 at the Leipzig Trade Fair .

It is still the most compact and lightest normal film single lens reflex camera with a revolver head for three lenses . The housing is cast from hydronalium . The ARRIFLEX was used by the Wehrmacht alongside cameras from Bell & Howell , Debrie, Askania , Zeiss and others. It was the camera for sports pictures, reports , scientific and nature photography .

The construction program essentially consists of four sand -cast parts - the left housing shell, the right shell, the removable cover with the finder tube embedded in it, and the revolver disc. The magazine shown in 1937 was a Linhof double cassette made of sheet steel. The so-called original ARRIFLEX was painted light gray, had no thumb claw on the right housing shell and no handles on the revolver disc. There was a central locking mechanism for all three lenses, similar in function to that of the Bell & Howell 8mm Filmo. The first work on a handheld camera with reflex viewfinder is said to have started in 1932. The engineer Erich Kästner was hired by August Arnold in the autumn of this year. The executing mechanic was Rudolf Brüller. The first four copies were sold in 1938.

The reflex system is based on a two-wing rotating shutter that deflects the light coming from the lens below 45 degrees. Thanks to the symmetry, a balanced run is possible, whereby the number of revolutions is half that of the gripper drive . At right angles to the optical axis there is a ground glass in the same dimensions as the image window. A magnifying glass provides a larger view of the ground glass. Due to the shape of the housing and the construction of the mechanism, the mirror shutter does not work light-tight. This is why a light protection was included from the start to keep the light from the unused lenses.

During the Second World War , the virtually identical CINEFLEX was manufactured in the United States of America. In contrast to the ARRIFLEX, it did not have a rod electric motor screwed on at the bottom, but an electric motor on the side. There was also a spring mechanism motor.

In 1951 the ARRIFLEX 16 was completed and sold from 1952. It has become a film camera used intensively for cinema and television worldwide, with which almost everything was possible, from silent picture reporting to synchronous sound recording to trick work . The ARRIFLEX 16 came with a hand crank accessory that was used in place of the electric motor, as well as a compressed air drive.

The Arriflex 35 mm product line (also 535, 535 B) has been discontinued. The successor was the ArriCam , which arose from the merger with the Austrian company Moviecam , which was bought by Arri . Arriflex 16mm cameras were marketed under the 16SR / HS and 416 names.

The manufacturer has now completely stopped manufacturing all analog film cameras and only produces digital cameras .

MOS cameras , also known as “silent cameras”, are used for recordings in which there is no simultaneous sound recording. Arnold & Richter, Cine-Technik Group, Ag., Calls these types the 235 and 435 series, which are also suitable for slow-motion recordings with up to 150 frames per second .

SyncSound cameras are used to record at 24/25 frames per second. The sound is recorded parallel to the image. They are very quiet at less than 20 dB (A). Arri refers to these types as the ArriCam series. This series is then subdivided again into the ArriCam ST (for studio, heavier and quieter) and the ArriCam LT (for light, lighter and louder).