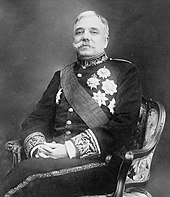 Artur Alberto de Campos Henriques (born April 28, 1853 in Porto , † November 7, 1922 in Lisbon ) was a politician from the final phase of the constitutional monarchy in Portugal . From December 26, 1908 to April 11, 1909, he was the Portuguese head of government and headed a non-partisan government appointed by King Emanuel II .

Campos Henriques was more politically close to the Regeneration Party , more precisely, to its conservative wing, without being bound by party politics. From 1900 to 1904 and in 1906 he was Minister of Justice in the second and third governments of Ernesto Rodolfo Hintze Ribeiro . In the government of his predecessor Francisco Joaquim Ferreira do Amaral , he also held the post of Minister of Justice, after the failure of the Ferreira do Amaral government, he took over the post of Prime Minister himself.