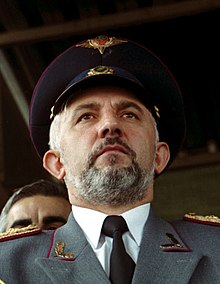 Aslan Maskhadov [ mʌsxadəf ] (Last in German also Maßchadow or Masschadow , Chechen Масхадан Али кІант Аслан , Russian Аслан Алиевич Масхадов *  21st September 1951 in Schakai, Kazakh SSR †; 8. March 2005 in Tolstoy-Yurt , Chechnya ) was from 1997 president of the internationally unrecognized Chechen Republic of Ichkeria and one of the leading figures of the Chechen resistance after the country's forcible reintegration into the Russian Federation.

Maskhadov was born in the village of Shakai in the Soviet Republic of Kazakhstan in 1951. The Chechen people were expelled from their homeland to Central Asia on February 23, 1944 under Josef Stalin . In 1957, Maskhadov's family was allowed to return to the Caucasus . Maskhadov joined the Soviet Army and was trained as a professional officer in the artillery in Tbilisi . In 1981 he graduated from the Leningrad Military Academy . Then he was transferred to an artillery regiment in Hungary. Since 1990 he acted as commander of the artillery and missile troops in Vilnius , the capital of the then Lithuanian Soviet Republic. With the collapse of the Soviet Union in 1992, he withdrew from the army and returned to Chechnya with the rank of colonel.

After the end of the Soviet Union, Maskhadov became Chief of Staff of the Chechen Army under the first Chechen President, Jokhar Dudayev . By defeating the Russian troops in the First Chechnya War from 1994 to 1996, Maskhadov gained political standing.

After the death of Jokhar Dudayev in April 1996, Selimkhan Jandarbiev became interim president, while Maskhadov was appointed interim prime minister. In this capacity, Maskhadov negotiated a ceasefire agreement with the Russian government in August 1996. Yandarbiyev and Maskhadov both ran for the presidential election on January 27, 1997. Maskhadov won the election, which OSCE observers also rated as free and fair.

In May 1997, Maskhadov and Russian President Boris Yeltsin signed a peace treaty declaring the confrontation between Russia and Chechnya over. However , Maskhadov was unable to counter the growing influence of fundamentalist groups under their leading figure, Shamil Basayev , and the establishment of state structures failed. Crime, terrorist acts and the Islamization of public life increased in the region.

Basayev's attempt to carry the resistance against Russia beyond Chechnya by attacking the neighboring republic of Dagestan in September 1999 served as the occasion for the Second Chechnya War . A month later, the new Russian head of state, Vladimir Putin , ordered the Russian army to march into Chechnya again.

The Chechen resistance fighters then dispersed in the rural areas and left the capital Grozny . Maskhadov went underground. Instead of the elected President Maskhadov, the Russian government installed Akhmat Kadyrov, who was acceptable to it, as head of administration in Chechnya in June 2000 . On Maskhadov she wrote a bounty of around ten million US dollars; in both Chechnya and Russia he was still regarded as the political leader of Chechnya. To what extent he had control over the fundamentalist wing of his troops remains speculative, however. Maskhadov worked with Basayev again and again; at the same time there was a long history of conflict between them. Shortly before he was killed in a bomb attack in 2004, Akhmat Kadyrov said Maskhadov would surrender to the federal security authorities. But "he could not decide to take this step for fear of Basayev."

Within the Chechen political spectrum, Maskhadov belonged to the moderate wing; in his statements he rejected acts of terrorism against civilians. That is why he was named by many observers as one of the few possible interlocutors for a peaceful solution to the conflict. The Russian government categorically rejected this view, accusing him of actually being responsible for various acts of terrorism. So he was u. a. accused of having ordered the hostage-taking in a Moscow theater in October 2002 and the hostage-taking in a school in Beslan in September 2004. Secret service circles in Moscow spread the allegation that he planned the hostage-taking in Beslan, only to emerge as the savior of the children, to become the hero of Beslan and to force the Kremlin to sit down with him. However, no evidence has yet been presented. Maskhadov himself had his spokesman Akhmed Sakayev denied involvement and in return accused the Russian government of ignoring his mediation offers. The Russian government put a $ 10 million bounty on Maskhadov after the Beslan hostage-taking.

On March 8, 2005, Maskhadov was killed in a special operation by the Russian domestic intelligence service FSB in the village of Tolstoy-Yurt after he had offered Russian President Putin a ceasefire to end the war a week earlier. His body was shown publicly on Russian television. His family was not allowed to bury the body. In an interview with the Russian news agency Interfax , Ramzan Kadyrov commented on the liquidation of Maskhadov, according to which Basayev of all people is said to have betrayed his hiding place to the special forces command.

Sheikh Abdul Halim Sadulayev succeeded Maskhadov as the leader of the Chechen separatists .

Chechen separatist leaders (presidents of the "Chechen Republic of Ichkeria")