The hairy stripe above the eye sockets of some mammals is referred to as the eyebrow (Latin Supercilium ), or brow for short (from Middle High German brā , “eyelash, brow”) . The eyebrows serve to protect the eyes from sweat , moisture, dust or other foreign bodies and thus support the function of the eyelashes . The eyebrows are also important for non-verbal communication . Your position and movement are part of a person's facial expressions and make facial expressions clearly legible from a few meters away.

The following two facial muscles are important for the eyebrows: The eyebrow lifter ( frontalis muscle ) , also known as the forehead muscle or hood muscle, lies across the entire width of the forehead up to the hairline. The eyebrow frown ( Corrugator supercilii muscle ) can pull the central side of the eyebrows down and thus causes the frown. 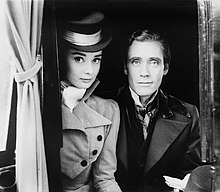 Facial expressions include, for example, the drawing together of the eyebrows, which represents astonishment or anger. The lifting of the eyebrows is made possible by the lift muscle. The eyebrows are raised in response to surprise or amazement, attention or fear.

In the conventions of many cultures , raising eyebrows has a special meaning:

A study published in 2003 and carried out at MIT showed, among other things, that test subjects could only identify 46% of the celebrities shown to them from a picture of their face from which the eyebrows had been removed. If you showed them photos without eyes, it was still 56%. The results made it possible to draw conclusions regarding the importance of the eyebrows in the recognition of a face.

In many societies, especially in the western world, eyebrows are often shaped by plucking with tweezers , singeing or treating them with wax. Which shape is perceived as ideal depends on the respective fashion. Repeated plucking can result in the eyebrow hair no longer growing back at this point.