In addition to directing flowing traffic, automatic traffic monitoring also serves to enforce rules and laws in road traffic. For this purpose, video surveillance systems are generally set up, which are followed by further systems for image evaluation.

The monitoring of crossing traffic is the first known application of video systems on roads. Such systems are usually supplemented by flow sensors and counting thresholds. So far, the spread of interventions in traffic light controls to stabilize the flow of traffic has lagged far behind the spread of traffic light systems.

Monitoring moving traffic is the second known application of video systems on roads. So far, the dissemination of solutions for the appropriate use of information for corresponding interventions controlling the flow of traffic has lagged far behind the dissemination of monitoring systems.

Monitoring the passage of vehicles at a specific location is a use of video recording for special evaluations, which has been shown in many films. In practice, archiving such recordings for a limited time has proven its worth. A general evaluation of such records is not legally permissible.

Section control systems are one method of speed monitoring. The travel time of a vehicle between two more distant points is recorded and the average speed is calculated from this.

This approach is a field of application for automatic license plate recognition. It must be possible to clearly assign the individual travel time between two measuring points to a vehicle. The only system currently ready for use comes from the manufacturer SPECS .

The advantage of such systems is that they do not measure an instantaneous speed. If the drivers know the position of a radar device, they only need to reduce their speed shortly beforehand in order to be able to drive faster again afterwards. Section Control, on the other hand, checks the speed over a longer distance (sometimes several kilometers) and forces the driver to reduce the speed sustainably. The disadvantage of such a system, however, is the significantly higher cost compared to conventional systems for local speed measurement.

In places where such systems are used, it is said that the number of accidents has been reduced significantly.

The longest route with such a system is on the A77 in Scotland, where the average speed is determined for 30 miles (30 miles) between Glasgow and Ayr.

In addition to recognizing the number plate, the system can also recognize the vehicle class based on its shape and size. The system can differentiate between cars, buses, trucks, trucks with trailers and motorcycles. This is necessary in order to be able to automatically enforce a different maximum speed (car: 80 km / h, truck: 60 km / h). The maximum speed for the Kaisermühlen tunnel can also be reduced from the control center, which is indicated to the drivers via LED panels.

The system is also used to detect wrong-way drivers , to monitor blocked lanes and to monitor vehicle height.

Enforcement of the toll

The data generated in Germany by the automatic number plate recognition as part of the automatic control of the truck toll may according to § 7 of the law on the collection of route-related fees for the use of federal motorways with heavy commercial vehicles are only used by the police for the prosecution of "toll evaders"; any further use for criminal prosecution is not permitted.

The highway 407 ETR in Ontario ( Canada ) uses a combination of automatic number plate recognition and radio transmitters to the toll to rise from vehicles. Radio antennas are located at every entrance and exit that record the movement of vehicles that have radio transmitters installed. Vehicles without a radio transmitter are recognized by their license plate, whereby the rental fees for the radio transmitter are considerably cheaper than the cost of a trip billed by video recording. In both cases, the costs incurred will be calculated by post.

A large number of other toll systems also use similar combined systems, such as: 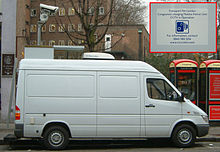 The London Congestion Charge is an example of a system that charges costs when entering a zone. Transport for London ( TfL ) uses an automated detection system to charge vehicles a daily fee of £ 8 when entering the toll zone between 7:00 am and 6:30 pm. Failure to pay the fee on time will result in a £ 100 fine. If the fine is paid promptly within 14 days, it is reduced to 50 pounds; if it has not been paid after 28 days, the fine is increased to 150 pounds, and further measures can then be taken.

Estimates assume that 98% of all vehicle movements can be correctly recorded. All recordings are evaluated by a data center in London for vehicle identification. A second data center is used for data storage and failure protection.

Both the front and rear license plates of vehicles entering and leaving the zone are recorded. This increases the chances of a correct detection. The recognized number plates are compared with a list of the trips that have already been billed; if necessary, a billing is initiated. The data is also compared with the registration data of the Driver and Vehicle Licensing Agency . Government research has shown that a significant portion of the data stored in this database is no longer correct. Among other things, this has meant that vehicle owners now have to initiate a correct re-registration when they sell their car.

Detail view of a control bridge

Control bridges check whether the vehicle's journey has been properly booked. This can be done either automatically using an on-board unit (OBU) or using what is known as manual log-in . The automatically recognized license plate is used to identify the vehicle.

If a current toll payment is available for the vehicle in the central booking computer, the recorded images are deleted again. If no booking can be found in the central booking computer or if the handwriting recognition software cannot clearly identify the license plate, all the data collected by the vehicle is saved in a data record and sent to Toll Collect for a manual check . The stored photos are then manually evaluated by employees of the operator. Photos of trucks with an OBU, whose number plate is not identical to the number stored in the OBU, are also evaluated in the follow-up inspection.

The license plate reading capabilities of the automatic control system are stated by Toll Collect to be over 90%. The identical control system in Switzerland, which determines the performance-based heavy vehicle charge ( HVF ), provides a recognition rate of 93% for vehicles with an OBU, i.e. with an electronic license plate transmitted during the inspection, and a recognition rate of 77% for vehicles without an OBU. 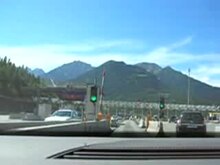 For certain sections of the Austrian motorways, a special toll is levied instead of the flat fee for the vignette for cars and the kilometer-dependent truck toll. On the Brenner autobahn , the Tauern autobahn ( Tauern tunnel and Katschberg tunnel ) and the Pyhrn autobahn ( Bosruck tunnel and Gleinalm tunnel ), this can also be paid using a video toll. A prepaid card must be purchased in advance, for which a license plate will be activated by the point of sale. Alternatively, the prepaid card can also be purchased online. In addition to single tickets, annual tickets are also offered.

The vehicle registered in this way can then pass the toll booth on its own lane. A maximum speed of 15 km / h is permitted when driving through, the width of the vehicle must not exceed 2.3 m. If the number plate is not recognized automatically, the vehicle is directed to a manual toll collection point.

License plate recognition is also carried out to check that each truck is correctly booked into the toll system . To this end, camera systems are set up on every fourth toll portal that recognize the trucks. In order to capture them optimally at night, too, bluish headlights are installed. The read-in license plates are compared with the data with which the GO-Box registers.

Some vehicle owners try in different ways to prevent being picked up and identified by automatic license plate recognition systems or traffic surveillance cameras in general. One way to do this is to increase the amount of light reflected from the license plate, which makes it difficult for the system to recognize the position of the license plate or to read the characters. This can be achieved with foils or sprays, although their efficiency is controversial. Such attempts are illegal in many states.

It is also more difficult to recognize older license plates whose reflectivity has already decreased significantly. The number plate can also be intentionally soiled or covered. In Toronto ( Canada ) , for example, a motorcycle driver was discovered who, while driving, was able to use a cable to pull another license plate in front of the valid one in order to conceal his identity in the camera sections.

In Texas, some decorative frame systems around license plates were banned in 2003 because they prevented the identification of the license plates. The use of such frames is now usually fined with a penalty of 200 US dollars , whereby the fine can be up to 2000 dollars and 180 days in prison if the frame was demonstrably used deliberately to prevent the automatic detection.

If a photo cannot be evaluated automatically, it can be forwarded to a traffic evaluation employee for manual rework. This may then be able to locate the affected vehicle in a vehicle database using the make, type or color of the car - together with the recognizable characters on the license plate.

In London, after the introduction of the surveillance system, there was an upsurge in illegally affixed license plates. These are copied from other cars with a similar appearance and mounted on your own vehicle. This means that automatic detection systems can be outwitted and follow-up checks by people can be made more difficult.