The station Skive ( Danish Skive Station ) is a Danish railway station in the town of Skive in Northern Jutland . The station is on the Langå – Struer railway line . Until 1972 Skive was a railway junction, from which two railway lines led to Salling . During this time the station was as Skive Hovedbanegård ( German  "Skive Hauptbahnhof" ) or Skive H respectively.

Today's third station in the city was put into operation on February 2, 1962 in connection with major route modifications in the area around Skive. 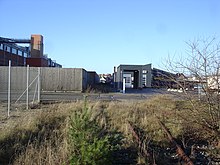 The Skive station ( location ) of the city was built as a terminus and terminus of the Viborg – Skive section of the Langå – Struer railway that opened on October 17, 1864 . The station was east of the city. Extensive construction work was thus avoided. There was no need for a bridge over Karup Å . 56.563444 9.035869

When the line was extended to Struer in November 1865, it could not be extended by the existing station. The trains to Struer had to be pushed back to the Skive sporskifte operating station in the direction of Viborg and could only continue to Struer after passing the switch connection . For this a bridge had to be built over Karup Å, but at a more suitable place near Lundbro.

A short time later the station was expanded and another bridge was built over the Karup Å, because from December 18, 1870 the port railway ( Danish Skive Havnebane or Skive Hestebane ) led to the port. In the first years of operation it was operated with horses.

On May 15, 1884, the Sallingbane from Skive to Glyngøre was opened. 500 meters northwest of the train station, this route was given its own Skive Holdeplads stop , which was closer to the city center. During the 1890s, around a third of travelers to Skive used this stop.

The second station was from 1888 east on Østre Fælled Vej

The old building was demolished during the First World War . On December 11, 1924, the private Vestsallingbane opened its Skive – Spøttrup line . You use the existing platform of the former train station.

The general increase in traffic including the Sallingbane meant that the original station was too small and had to be expanded. On September 28, 1888, the second station ( Lage ) was put into operation. The station building was 300 meters east of the first station. 56.561173 9.042896

From May 1, 1992, the Skive holdeplads , which had been used by the Danske Statsbaner until then , was converted into a train station called Skive Nord . Up to this point it was not possible to confuse the Holdepladsen with the train station. There were now two train stations in the city. Therefore, it was from 22 May 1927, the previous station Skive station as Skive Hovedbanegård ( German  "Hauptbahnhof" ) with the short form Skive H respectively.

The railway tunnel under the Holstebrovej

The station was demolished only a few months after the opening of the third station in 1962.

Skive kept its terminus for almost a hundred years. It was not until February 2, 1962 that the through station opened as the city's third station. During the construction work, the Langå – Struer line was completely rebuilt over a length of four kilometers.

The two Sallingbahnen, which ran around the city from Skive Nord in the east, were also threaded into the new station. The new route in the west of the city was one kilometer longer. Already in the 1940s the route was finally determined, but it was not until 1952 that construction work began on the northern section. The viaduct under the Vindevej was built in 1954, after which work on this project was suspended again. Between 1958 and 1960 the 132 m long tunnel was built under the Holstebrovej and in the summer of 1961 the tracks were laid.

The two lines of the Sallingbahnen had split in the Skive Nord station . With the new route, a new stop Skive Nord was set up , three kilometers after Skive train station, where the routes separated from that point on, so that there was only one train station in Skive.

The new station was laid out with four platform tracks. DSB used three of them for the lines between Langå and Struer and for the branch line from Skive to Glyngøre. The fourth track was reserved for the private Vestsallingbane Skive – Rødding.

On March 31, 1966, the Vestsallingbane was closed, on May 23, 1971, the suspension of passenger traffic on the Sallingbane followed. With the timetable change on May 28, 1972, the addition Hovedbanegård disappeared , and the railway facilities were also dismantled on two platform tracks.

After the renovation work in 1962, the old line through the former terminal station became part of the port railway that opened on December 18, 1870. This is no longer in operation, the rails are still there.