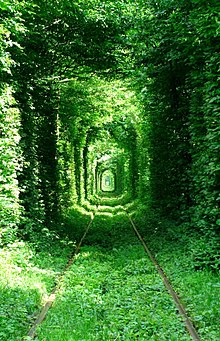 The Klewan – Orschiw railway is a four-kilometer, single-track , non- electrified railway line in Ukraine . It is only used in freight transport.

The branch line branches off the main line Kovel – Kosjatyn in Klevan station in an easterly direction. It leads through a wooded swamp area. The adjacent forest has overgrown the route so that it appears to lead through a green tunnel .

The line was built in 1870 to provide a railway connection for the woodworking industry in Orshiv .

When photographer Serhii Delidon used the tunnel as a backdrop for wedding photos in 2009, the motif soon became very popular and made a career for itself on the Internet. Other photographers followed the “discoverer” and in 2014 Fujifilm used the location for a commercial . Other film teams followed, the “Green Love Tunnel” received cult status and was even recreated in China . In the USA and in the UK are Murals sold with the subject. The railway line is a popular destination.

The route also serves the woodworking industry, including the transport of pressboard , and a repair workshop for the Ukrainian armed forces for heavy equipment. Freight trains run several times a day.