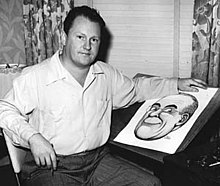 Wolverton, who had received no artistic training, published his first drawing in America's Humor magazine in 1926 , but his first comics Spacehawks and Disk-Eyes did not appear until twelve years later, after he had already established himself as a newspaper draftsman . He created his first humorous series in 1941 for Marvel Comics . In 1954 he briefly drew for MAD and then for Panic before retiring from the comic industry to work as a cartoonist and illustrator.

With his particular style, Wolverton influenced many underground artists. His most famous drawings included a reference to Al Capp's strip Li'l Abner , entitled Lena the Hyena , which featured on the cover of Life magazine in 1946 . In German, Wolverton published the Cherry Bim series in various publications of the Alfons Semrau Verlag in the 1950s . The biblical story for young and old drawn by him appeared in the 1970s. In 1991 Wolverton was inducted into the Jack Kirby Hall of Fame . In 2000 he was accepted into the Will Eisner Award Hall of Fame .