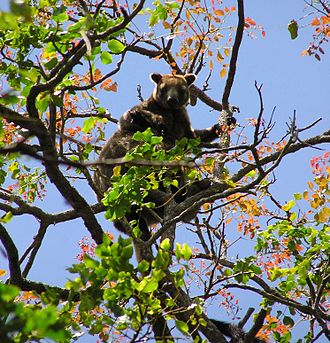 Tree kangaroos ( Dendrolagus ) are a genus of the kangaroo family (Macropodidae). In contrast to other kangaroos, the representatives of this genus have adapted to an arboreal (tree-dwelling) way of life and therefore do not correspond to the common kangaroo model. All species live in Oceania and feed on different plant species and parts.

Tree kangaroos are found in New Guinea ( Western New Guinea and Papua New Guinea in the lowland and mountain rainforest and in the subalpine zone) and on the Cape York Peninsula in northeastern Australia ( Queensland ), where they live in forests and rainforests.

Tree kangaroos are usually about 1.3 to 1.8 meters long, the head-trunk length is about 50 to 80 centimeters, the tail length 50 to 90 centimeters. The weight ranges from 5 to 18 kilograms. The fur is black or gray-brown on the upper side, in some species it is also patterned. The underside is often whitish.

Compared to their ground-dwelling relatives, tree kangaroos have shorter, stockier legs with wider soles with sole pads and stronger forelimbs. The long, curved claws, reminiscent of bear claws, are a further adaptation to the arboreal way of life. The ears are rounder and the muzzle shorter than other kangaroos. The tail is hairy and evenly thick. The difference in length of the hind limbs between ground-dwelling kangaroos and tree kangaroos is considerable: in tree kangaroos the hind limbs have 90–110% of the length of the head trunk, while in the agile wallaby ( Macropus agilis ) it is 160%.

Tree kangaroos inhabit higher rainforests. They are skilled climbers and jump 9 m from one tree to the next. According to reports, they can jump to the ground from a height of 18 meters without injuring themselves. During the day they hide in the trees and at night they look for food, for which they often come to the ground. On the ground they move with small hops and look more awkward than on trees. Their diet consists mainly of leaves and fruits.

Tree kangaroos have many aspects of reproduction in common with other kangaroos: After around 30 days of gestation, usually only one young is born, which remains in the pouch for almost a year. Tree kangaroos can live to be 20 years old.

Tree kangaroos are the largest tree-dwelling marsupials and have few natural enemies other than giant snakes and the dingo . The deforestation of the rainforests is their greatest threat. They are also hunted for their fur and meat. Three species are classified as threatened by the IUCN , and two more are endangered. 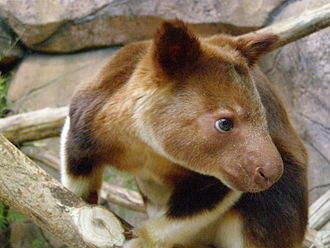 By comparing three genes of mitochondrial DNA , six evolutionary lines of the tree kangaroos could be identified, one in Australia with two species ( D. lumholtzi, D. bennettianus ) and five in New Guinea ( D. inustus, D. ursinus , Goodfellow group ( D. goodfellowi, D. spadix and D. matschiei ), D. mbaiso and the Doria group ( D. dorianus and D. scottae )). The Australian species are in a sister group relationship to those in New Guinea. This results in the following cladogram :

The position of the bear tree kangaroo ( D. ursinus ), which is morphologically very different from the other tree kangaroo species and is the only tree kangaroo endemic to the Vogelkopf Peninsula, could not be determined. Within the tree kangaroos, 13 of the previously described species and subspecies are recognized as valid species, two in Australia ( D. lumholtzi, D. bennettianus ) and 11 species in New Guinea ( D. inustus, D. ursinus, D. mbaiso, D. dorianus , D. notatus, D. stellarum, D. scottae, D. spadix, D. matschiei, D. pulcherrimus and D. goodfellowi ).

This genus was given the scientific name Dendrolagus , which is still valid today, from its discoverer, Salomon Müller . This means 'tree hare' and probably came from the jumping agility of these animals and the tree-dwelling way of life ( dendron 'tree', lagos 'hare'). 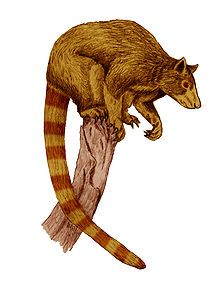 Bohra paulae , a giant tree kangaroo from the Ice Age

In the Ice Age much larger tree-kangaroo existed in Australia. These belonged to the genus Bohra and were about twice as large as today's species. Interestingly, their remains were also found in the now completely treeless Nullarbor Plain . Even at the time of these tree kangaroos, the relatively dry region was not home to any extensive forests. It is therefore believed that the animals climbed the individual smaller trees to reach the foliage.