The Siege of Jasna Góra (also known as the Battle of Jasna Góra , in Polish : Oblężenie Jasnej Góry ) took place in the winter of 1655, during the Second Northern War and the Swedish invasion of Poland-Lithuania . The Swedish army tried to seize the Jasna Góra monastery in Częstochowa . The month-long siege turned out to be in vain, however, as a group of monks from the monastery in question - led by their prior - were able to repel the numerically superior army of the Swedes, in which German mercenaries also fought. They received the support of local volunteers, mostly members of the Szlachta , so that they also managed to save their holy icon, the Black Madonna of Częstochowa . Along with the Tyszowce Confederation, this event represented a turning point for Poland-Lithuania, which had been unsuccessful in the war against Sweden up to that point.

“On August 6, 1655, after this terrible news, a council was held under the direction of Teofil Bronowski, Prior Augustyn Kordecki and Garrison commander Colonel Jan Paweł Cellari. We begin with the preparations for the armed defense for the fortress monastery Jasna Góra. "

The 1650s marked the end of the golden age of Poland-Lithuania , which in a series of wars, especially the Khmelnytsky Uprising and the Russo-Polish war of 1654-1667 was involved. In 1655, the Swedes decided to take advantage of Poland's weakness and revive the Polish-Swedish War, which had been smoldering for a century. The Swedish armed forces then quickly conquered large parts of Polish territory. At the end of 1655, the Polish King John II Casimir had to take refuge in Habsburg Silesia. Despite this, the Polish-Lithuanian troops were not completely defeated, whereupon the Swedes decided to secure the fortified monastery of Jasna Góra on the Silesian border - an important fortress known for its wealth.

As the Swedes approached the place, the monks feared that the Protestant attackers would loot the Catholic monastery, given that the Thirty Years War , which began as a religious war, had only ended shortly before. For this reason, the holy icon of the monastery was replaced by a copy and the original was secretly brought to the Lubliniec Castle on November 7th of that year and later to the Głogówek Monastery . The monks also acquired around 60 muskets and ammunition and employed 160 soldiers to support the around 70 combat-capable monks. The defense was additionally strengthened by the support of around 80 volunteers (including Stanisław Warszycki). The monastery also had good artillery equipment: 12-18 light and 12 larger caliber cannons.

When the Swedes realized that they couldn't take the monastery in a surprise attack, they tried to negotiate. On November 8, 1655, the Swedes asked to be able to garrison the monastery, but this was refused. However, the prior of the monastery Augustyn Kordecki offered to recognize Karl X. Gustav as king, while he repeatedly asked for help from the Polish king John II Casimir, but finally refused on November 18 to let a Swedish unit into the monastery. The Swedish commander, General Burchard Müller von der Lühne , who had a force of 2,250 men (1,800 cavalry, 100 dragoons, 300 infantrymen and 50 artillerymen) and 10 cannons (although of a light construction - eight six-pounders and two four-pounders), decided - after further unsuccessful negotiations with Kordecki - to begin the siege, which was to last until the night of December 26th to 27th.

Plan of the Jasna Góra monastery

“My dear and honored friend, the second and third day of this month brought a heavy bombardment of artillery against the fortress from dawn of December 2nd to evening of December 3rd, by cannons in the redoubts R1 in the north and R1 in the South, with itself. The result of this bombing was modest. Local fires in the buildings of the monastery, which were ignited by incendiary bullets, were skillfully extinguished by the defenders. "

- Augustin Kordecki, prior of Jasna Gora, and commander of the fortress on December 3, 1655 in a letter to Zagloba

The siege began on November 18th, the Swedes outnumbered, but had poorer artillery than the one in the monastery. On November 28, the besieged, led by Piotr Czarniecki, carried out a surprise breakout and destroyed two Swedish cannons. This was followed by renewed fruitless negotiations - the Swedes arrested two monks, but later released them. Since Kordecki refused to give up the monastery, the fighting continued. Towards the end of November, the Swedes received reinforcements: over 600 men and three cannons. On December 10, the Swedes received heavy siege artillery (two twenty-four pounders and four twelve pounders) and 200 other men. The Swedish side now had artillery of greater caliber than the besieged, but the number of cannons was still fewer than that of the Poles. At that time the Swedish besiegers were at the height of their strength with 3200 men (800 of them Poles who served the Swedish king) and 17 cannons. It should be noted, however, that the army at Jasna Góra - although referred to as "the Swedes" - actually consisted for the most part of German mercenaries. With their new artillery, they severely damaged the north walls and the Holy Trinity Bastion .

On December 14th, the Poles broke out again, destroying one of the Swedish redoubts and one of the twenty-four pound cannons. The Swedes then began to bombard the south side and dig a tunnel. On December 20, Stefan Zamoyski led another outbreak, this time shortly after noon. They destroyed two cannons and killed most of the miners in the tunnel. On December 24th, Kordecki refused to give up again, whereupon the Swedes began to bombard the north side of the monastery. During one of their heaviest bombardments, the Swedes' second twenty-four pound cannon exploded.

The Swedes then asked for a ransom of 60,000 thalers to end the siege, but Kordecki replied that he would have been willing to pay this sum before the siege began, but that the monastery now needs this sum itself to repair the siege damage . Ultimately, the Swedes decided to withdraw on December 27, 1655. In the weeks that followed, they made a few more attempts to capture the monastery by surprise attacks, as the fortress monastery became an increasingly important center for the local anti-Swedish guerrillas. At the end of the conflict, the Polish side mourned several dozen losses, the Swedish several hundred. 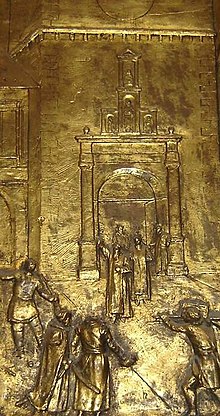 “My dear and dear friend, the morning light of December 27th, the day of St. John, saw the dust of the retreating columns of the Swedish army. General Müller has ended the siege of Jasna Góra. "

- Augustin Kordecki, prior of Jasna Gora, and commander of the fortress, on December 27, 1655 in a letter to Zagloba

The fortress monastery of Jasna Góra was the only fortress in Poland that the Swedish invaders could not conquer. Historians disagree on assessing Jasna Góra's defense as a turning point in the war. By December, when the Swedish troops abandoned the siege, the Polish armed forces had already begun to gain the upper hand in the conflict and the successful defense of the monastery certainly served as an important moral aid. Even so, it is still an open question to what extent Jasna Góra's defense ultimately motivated or supported the defenders of Poland.

In 1658, Prior Augustyn Kordecki published the book Nova Gigantomachia in Claro Monte Czestochoviensi , in which he greatly exaggerated the importance of defense. A year later, the author Stanisław Kobierzycki based his text Obsidio Clari Montis Częstochoviensis on it. Finally, in the 19th century, the defense of the monastery was made widely known through the novel Potop (1886) by Nobel Prize winner Henryk Sienkiewicz , one of the most important Polish authors of his time (the novel was made into a film in the 20th century). However, the fictional narrative is relatively inaccurate, as besides the introduction of numerous fictional characters (such as Andrzej Kmicic) the Swedish side is shown as even more superior and the Polish side as even weaker, in order to reinforce the impression of "heroic defense".