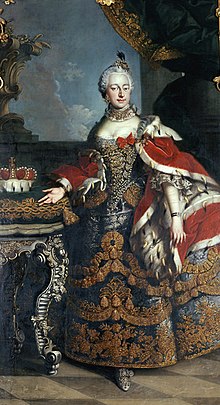 Bernhardine Christiane Sophie was a daughter of Duke Ernst August I of Saxe-Weimar-Eisenach (1688–1748) from his first marriage to Eleonore Wilhelmine (1696–1726), daughter of Prince Emanuel Lebrecht of Anhalt-Koethen .

She married Prince Johann Friedrich I of Schwarzburg-Rudolstadt (1721–1767) in Eisenach on November 19, 1744 . The princess, who was described as particularly benevolent, acquired the Rudolstädter Handwerkerhof in 1756 and founded the "Bernhardinenstift" named after her for noble women. A coat of arms on the entrance portal of the Handwerkerhof commemorates the princess. The house was expanded to accommodate six women, for which Bernhardine also bought another outbuilding. The statutes of the foundation were drawn up personally by the princess.

The princess did not live to see the inauguration ceremony in 1757, she only died at the age of 33, deeply mourned by her husband, who did not remarry. Paintings of the princely couple by Johann Ernst Heinsius are in the Green Hall of Heidecksburg Castle .

Bernhardine Christiane had the following children from their marriage: